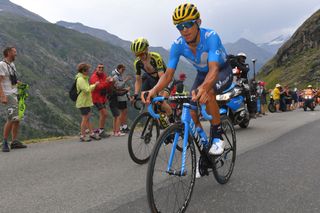 A week into the new year, the future of Andrey Amador remains unresolved, with the UCI currently looking at the contract dispute between the Costa Rican, his former team, Movistar, and his prospective team, Ineos.

Due to a lengthy Christmas break, the situation wasn’t able to be resolved before the official start of the 2020 season, and the matter is only being picked up again this week after UCI staff returned to work.

The governing body confirmed to Cyclingnews that the Amador case is now back with the Arbitral Board, but an approximate date for a ruling remains unclear, despite the rider and teams all suggesting for several weeks that the matter would be resolved imminently.

As it stands, Amador is unemployed but is set to complete terms with Team Ineos if he can break free from the pre-contract he signed with Movistar last year, when he was negotiating an extension. If not, he’ll have to pay a substantial fee to trigger a release clause – something he has been unwilling to do until now.

The cause of the current mess is that Amador signed pre-contract agreements with both Movistar and Team Ineos, according to Movistar boss Eusebio Unzué.

"For me, a signature is something very serious. Both Amador and [Amador's agent Giuseppe] Acquadro are in a compromised situation with the UCI because they have two contracts signed. They both signed with us on the eve of the Giro d’Italia in Bologna," Unzué said in a recent interview with El Confidencial.

"We will not stop him leaving, but he has to pay the compensation because that’s what the law stipulates. This conflict has a simple solution: If he pays, he goes."

Amador and Acquadro, meanwhile, have remained tight-lipped. The 33-year-old, who was instrumental in helping Richard Carapaz to victory at last year’s Giro d’Italia, has only publicly spoken in an interview with the Joan Seguidor website in early December.

On the final day of 2019, he was apparently spotted riding in La Garriga, Catalunya, wearing full Ineos kit, with his surname stitched into the side. Given his contract with Movistar only expired that midnight, he may have been in breach of his terms, which usually prevent a rider from wearing a new team’s kit until the new year.

The Amador saga is one of the reasons behind a complete breakdown in relations between Unzue and Acquadro, following Giro d’Italia winner Richard Carapaz’s decision to move to Ineos. Movistar are now refusing to work with Acquadro on any basis.