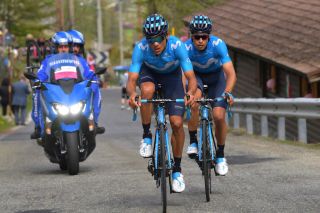 Andrey Amador has cancelled his contract with Movistar and will move to Team Ineos for the 2020 season, according to Spanish newspaper Marca.

The Costa Rican's contract was due to run until the end of the 2021 season, but he will instead join Giro d'Italia winner Richard Carapaz in making the move to the British squad.

The move is the latest twist in the battle between the Spanish team, managed by Eusebio Unzué, and the 'super-agent' Giuseppe Acquadro. The Italian manages Carapaz and the departing Nairo Quintana and is well known for his links to Astana and Ineos.

Transfer mechanics: Lifting the lid on the Iván Sosa saga

Amador will become the third Acquadro client to break a contract with his current team in order to move to Ineos. Back in 2017, Egan Bernal did so amicably with Androni Giocattoli-Sidermec, while Iván Sosa departed for the team last summer after a contract dispute with Trek-Segafredo.

Movistar had announced Amador's contract extension at the end of the Tour de France in July, where he was among the support squad for Quintana, Mikel Landa and Alejandro Valverde as the trio finished top 10 overall in Paris.

It's not known exactly what caused the change of heart, but Amador will be ending a 13-year working relationship with Movistar and their Lizarte feeder squad, where he began his career back in 2007.

"It seems that we have become a subsidiary of Ineos," an anonymous Movistar source told Marca.

The falling out between Unzué and Acquadro reportedly stems back to  the Giro in May, when the Italian said that Carapaz, who was in the process of winning the race, would not be renewing his contract.

Later, at the Tour de France, it appeared that the disagreement escalated when Acquadro told reporters after stage 16 in Nîmes that Unzué had sworn off signing any of his clients in future. "Unzué is going to suffer for it," he said. "I'm taking some of the best young Spaniards – the ones he wants – and they're going to go elsewhere."

Amador, a vital part of Carapaz's Giro win, will join up with numerous Acquadro clients at Ineos, including Bernal, Carapaz, Sosa, Michał Kwiatkowski and Vasil Kiryienka. Highlights of the 33-year-old's time with Movistar include finishing fourth at the 2015 Giro d'Italia and winning a stage in 2012, plus the Klasika Amorebieta in 2018.