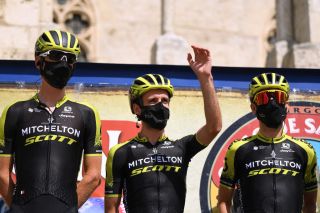 Mitchelton-Scott faced a day of mixed fortunes in the Vuelta a Burgos as Esteban Chaves stayed solidly in contention on the double uphill climb that concluded the stage but Simon Yates and Jack Haig both lost significant amounts of time after unlucky crashes.

Visible just behind the leading line of Team Ineos riders as they crossed the Alto del Castillo summit finish for the first time, Chaves was never out of the action with the other contenders as they raced round the finishing circuit and he finally crossed the line in eleventh place.

"Our objectives here are to get back into competition, and it's a nice way to get the account started," team manager Matt White told Cyclingnews.

A fresh start in the Vuelta a Burgos for men's professional cycling?

Regarding Chaves GC option, he said, it was an excellent start, but the race would likely prove to be "as much as voyage in the dark as it is for everybody.

"We've been out of competition for five months and our main goal is that we exit here better than we came in.

"But at the same time we're here to race, so if we get stage wins, great. And if there's a GC option with Esteban, that'll be a bonus, but his bigger goals are a way down the line, so it's a good chance to see where he's sitting one month out from the Tour."

Regarding the structure of the race, White feels that stage 3 to the summit finish of Picón Blanco could well be the real decider, and not just because riders won't be sitting on their cards, as they are unsure of their underlying form.

"I think the first one is probably harder than the second [Lagunas de Neila], so I'm expecting bigger gaps than on the last day," White said.

On the downside for Mitchelton-Scott, two of their top options for the mountain stages and GC, Simon Yates and Jack Haig were unlucky enough to crash - in Haig's case, twice -  and lose time. Neither riders suffered any major injuries, according to White, but both lost over three minutes, severely reducing their chances in the overall in a race normally won by much smaller margins.

"There were lots of little crashes and crosswinds, so lots of people went down," White said. "There was groups that didn't get back, groups that were coming back after one crash that got caught in another one.

"When [Remco] Evenepoel [Quick Step-Deceuninck] attacked"  - an impressive solo move in the last 30 kilometres  - "at that point there were already five groups, it was just reforming. That last hour, there was an awful lot going on."