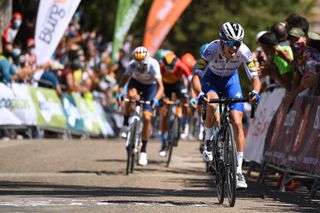 There may be doubts, mixed messages and downright contradictions from the authorities and politicians about this particular question in the UK, the US and elsewhere right now - but in Spain, when it came to spectating for the first major men's road-race held under COVID-19 conditions on Tuesday at Vuelta a Burgos nobody could claim they hadn't been told what they could or couldn't do.

"Señora, you can't go in there without your mask on your face, not your arm," one local policewoman patrolling the start area of the Vuelta a Burgos stage 1, politely but firmly admonished a middle-aged woman who had attempted, in vain, to sneak past her to reach the crowds of spectators inside, with said article dangling from her wrist.

Indeed given the ancient surroundings for stage 1's sign-on on Tuesday morning, right in front of Burgos' centuries-old main cathedral, the clash between the old and the 'new normality' for bike racing could not have been more evident.

Only small children appeared exempt from the regulation. Whether it was the organisers buzzing around the stone-flagged square, the couple of hundred spectators, the two dozen media or the few National Police corps agents wielding formidable sized sub-machine guns - everybody was wearing masks. It almost felt the lone TV helicopter buzzing overhead in the blazing sunshine on Tuesday should have had some kind of giant blue cloth and strings enshrouding the front half of the cockpit if it didn't want any cops wagging their fingers at it from the square below.

All 152 riders taking part were equally conscious about following the organisers' pre-race instructions, with the only difference between teams as their seven respective riders wheeled into Burgos main square, being the colour and design in the masks: some bore specially created team issue designs, others made do with plain old navy blue or black.

But if the riders, in the days preceding Burgos, have invariably proclaimed themselves eager to get back into racing after such a long absence, the atmosphere overall in Burgos was notably more subdued. It wasn't just the absence of any music between teams signing on or the smallish size of a crowd: for all the anticipation for the fans too, the public were anything but boisterous.

It was notable that the fans were willing to applaud the top names, politely, listen to the brief speeches by local dignitaries in relative quiet, and fall almost completely silent when asked to do so in the minute's remembrance of the COVID-19 victims.

But compared to 'usual' stage starts, there was a notable lack of banners or fans in replica team kit, beyond one woman in an Ecuador football jerseys, and no requests - at all - for a selfie or an autograph from the riders. In Burgos at least, the message that the riders needed to be left at the required social distance seemed to have sunk in with a vengeance.

The arrival of the Israel Start-Up Nation's five riders at the start did cause a flurry of activity, given the news overnight concerning their rider Omer Goldstein's positive for COVID-19, but that was more among media and organisers than the fans.

It was notable that rather than the standard seven starters at Burgos - for ISN on Tuesday there were only five, although Goldstein was never set to one of them. But the procedure for the quintet was identical to the rest of the line-ups: dismount and stand in the middle of the square while the previous team are ushered on stage, go through an arc for a daily pre-race temperature check then head up onto the podium. Then back onto the bike and back to the bus - all without removing masks or any individual greetings of friends or family.

The only moment where the ISN riders appeared to do a double-take was when the race speaker, not looking up from his notes at which ones were lined up next to him, rattled through missing rider Alex Dowsett's achievements without noticing his non-presence on the starters' podium. But after some of the usual pre-race optimistic comments from the team leader - in ISN's case, Dani Navarro - they, too, were gone, with far less of the usual hullabaloo, not to mention the complete lack of interviews, asked for or given, with radio and TV media around the sign-on area.

Other differences at the start were subtle rather than drastic, like the clingfilm over the microphone used by the race speaker when interviewing the riders, or the hand gel offered by some team press officers to their charges when the riders returned to the bike. But they all pointed towards a bigger, stranger, picture.

At the finish on the final grinding ascent of Alto del Castillo it was a similar, if much briefer story. Although the bright orange t-shirts worn by a knot of supporters on the final lefthand bend just 50 yards made it clear that which Basque team they were there to support, and the crowds were present in force on the last kilometre - all wearing masks again, if not so respectful of distancing as the start - the applause again, wasn't overly boisterous.

At the finish itself we had an efficient, but mask-enshrouded series of interviews and a winner's ceremony, in this case behind closed doors in Burgos castle. But, in keeping with the times, nothing more.

Yet from the initial charge of the top 30 or so leading riders up the hill to the usual fallout from a long day in the saddle, the peloton stretching into smaller and more fragmented units as the afternoon wore into evening, that spectacle at least remained unaltered.

And from Felix Großschartner (Bora-Hansgrohe), blowing kisses and raising his arms skywards as he crossed the line to Finn Fisher-Black (Jumbo-Visma), 18 minutes down, dead last in the 150 strong peloton and just looking for the chance to stop pedalling, the riders were all applauded and cheered by the fans: some things, it seems, don't change, for the public either, no matter the era.