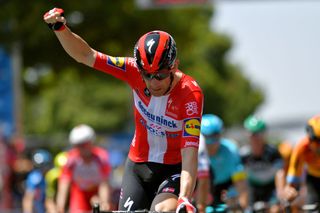 Michael Mørkøv is in isolation in a hotel room in Berlin after travelling from the UAE Tour to the Track World Championships.

The Deceuninck-QuickStep rider did not start Thursday's fifth stage of the UAE Tour and travelled to German as part of an agreed race schedule that would allow him to ride for Denmark in the Madison event on Sunday with Lasse Norman Hansen.

Mørkøv arrived in Berlin before news of the outbreak of the coronavirus SARS-CoV-19 at the UAE Tour was confirmed overnight.

The final two stages of the UAE Tour have been cancelled after two Italian staff members of one of the teams participating were confirmed as having tested positive for the virus. All the riders, team staff, media and race staff in the UAE are being tested for SARS-CoV-19, with the first results expected on Friday afternoon.

According to reports by Danish media, who have spoken to Mørkøv, he will also likely undergo testing on Friday.

"I woke up and saw that a panic had begun to spread. Throughout the night, everyone has been testing down there in the UAE, which is why I, together with country coach Casper Jørgensen, decided that I stay in the room and wait," Mørkøv told Danish television channel TV2.

"Right now, I wish they could come and test me so that we can get a result that is hopefully negative and be allowed to continue. It does not have major consequences today. I probably should have gone to a little track training but otherwise it was a quiet day. So it's nice to be here and not have contact with others in case I'm a carrier."

"The UCI race doctor called and asked me how I was doing. I'm 100 percent fine. I am in good health and have no symptoms at all," Mørkøv told Ekstra Bladet.

"He is fine and he says that it is strange that he has to sit up there all alone when he actually feels excellent," Elleberg Petersen told Ekstra Bladet.

"For safety reasons he is kept away from others and therefore he does not come down to eat with the other riders in the hotel. We are awaiting a decision from the authorities, which is the UCI the World Championship organizers and the German health authorities."

It is not clear if he Mørkøv will be allowed to compete in the track work championships but he is ready to do so.

"If we can somehow get a clarification today, I'll probably be 100 percent ready to run on Sunday," he said. "But it is clear that if nothing happens today and we arrive tomorrow and halfway through tomorrow, we will start to run out of time."