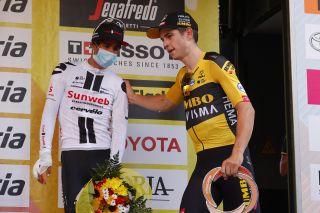 Michael Matthews (Team Sunweb) has been forced to miss Saturday's Il Lombardia due to the hand injury he sustained at Milan-San Remo last weekend.

Matthews finished third in San Remo but did so with a bloodied hand after he scraped into a wall near the top of the Poggio just as he was about to attack.

Despite not being able to "hold the handlebars properly", he made it down the descent and won the reduced group sprint for third behind Wout Van Aert and Julian Alaphilippe.

Matthews' hand has still not recovered to the extent where he is able to control his bike properly, and so Team Sunweb have taken the decision that he won't race Il Lombardia.

"Things are heading in the right direction, but his hand still needs some more time to recover. "He does not yet have full motion back meaning that he cannot grip the handlebars or brake efficiently," said team physician Camiel Aldershof.

"We expect that he needs another 10 or so days for the wounds to heal and then he will be back and ready for action."

Matthews has raced Il Lombardia three times but has never finished the Italian Monument, which usually takes place in the autumn.

He will be replaced in Sunweb's line up by Martijn Tusveld, with Wilco Kelderman set to lead the line for the squad on Saturday. Completing the Sunweb line-up are Chad Haga, Jai Hindley, Chris Hamilton, Nico Denz, and Florian Stork.

"We have got some good options to go for a result in the race with a strong team, with Wilco in good form after his 7th on GC at Tour de Pologne," said sport director Luke Roberts.

"A race that is normally very hard, is going to be made even harder this year with the date change. Not only do the riders have the difficult parcours to contend with but the hot temperatures forecast will make the race even more tough. We’re looking forward and really motivated for what is set to be a unique edition of Il Lombardia."

In the restructured 2020 calendar, Matthews' season is built around the October Giro d'Italia, which he's racing this year at the expense of the Tour de France and the Classics.

Milan-San Remo had been his big early objective but he was forced to settle for a second visit to the podium, which he made with a bandaged hand and bloodied shoe.

"On the second part of the Poggio, I wanted to attack. There were a couple of other guys in front of me who were also attacking and I wanted to go. But then the door closed in front of me and I went against the wall. I scraped my hand and shoulder along the wall," Matthews said of his incident in San Remo.

"I couldn't hold my handlebars properly, but I knew that my team had done such a great job that I didn't want to give up. It was all or nothing for me in the sprint, to see what I could get out of it after what happened."

Matthew gave an up date on his injuries from his home in Monaco. He hopes to return to racing at the Bretagne Classic - Ouest-France WorldTour race in France on August 25.

A quick update about Il Lombardia. Good luck to the team!#KeepChallenging pic.twitter.com/U33nQCJBTIAugust 14, 2020