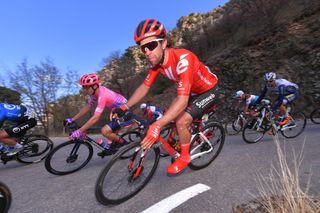 Sunweb sports director Matt Winston says “exposure” is the team’s main aim for the condensed remainder of the 2020 season and one of the reasons behind the significant changes made to star sprinter Michael Matthews’ racing programme.

Speaking to Cyclingnews as he travelled to a team training camp in Austria, Winston outlined the German-registered team’s response to the COVID-19 pandemic, which forced the suspension of the WorldTour season after Paris-Nice in March.

From the start of the season, Matthews had prepared for a campaign based around the Ardennes Classics and Tour de France, and the Australian was confused when his team announced last week that he would instead line out at Milan-San Remo (August 8), Il Lombardia (August 15), Bretagne Classic Ouest-France (August 25), Tirreno-Adriatico (September 7-14) and the Giro d’Italia (October 3-25).

At Sunweb, senior team management devise race programmes and then send draft versions to race coaches for input. Those coaches in turn pass the schedules onto riders, who likewise have a window to provide feedback. Matthews was due to speak to senior team management about his revised direction at the end of last week but hasn’t yet done so.

Sunweb have arranged their scheduling in a way that will see riders divided into three distinct “bubbles,” each of which will participate in set races and see out the remainder of the season together in an effort to stem potential COVID-19 exposure and transmission.

“But then when you factor in the coronavirus and the pause to the season, and then you look to the race calendar, one thing that is important for all teams is exposure in this next part of the season.

“So, we look to opportunities, where can we win races, who can we win races with and I think Michael’s programme is a good one, where he can win a hatful of races and finish the season in a really good way. When you look at Milan-San Remo, Lombardia, Plouay, they’re all races where you look at them and go, ‘Michael Matthews can win that.’ You go to Tirreno, the Giro and you look at some of those harder sprint stages and, again, it’s the same thing.

“We have to try and balance the team out. You’ve got such a condensed program. We’ve also got some really talented guys and it’s about looking at that big picture and thinking where can we win some races? Where can we get the exposure from?

“We want to give maximum opportunities to guys to show their talent and you look at Michael’s race programme there and that’s a maximum opportunity where he can really get stuck into that and win some races. To be honest, I’m really excited to see what he can do in that line-up.

“Some of those races I worked with him on last year and I could see the potential was there and things didn’t just quite click together. He was there or thereabouts. I think if he can join all the dots this year and we can work with him, with the team, and join those dots, I think he can have quite a successful autumn.”

Sunweb’s approach to Grand Tours will vary this year. The team is set to adopt an opportunistic plan of attack at the Tour de France, with a line-up that features Tiesj Benoot, Nicolas Roche and Cees Bol. At the Giro, Sunweb have both stage victory and general classification ambitions with Matthews and Wilco Kelderman, respectively. Kelderman, who will have Sam Oomen in support, is aiming for a top five finish overall.

Sunweb, thanks to sponsors, booked out an entire hotel for a training camp in Austria that has the whole team in attendance, with the exception of Matthews, who is training alone in Italy. Everyone there will be divided into the “bubbles” in which they will move for the rest of the season.

“We’ve worked really hard to make sure the camp is safe. So, we’ll have the hotel to ourselves, we’ll work in different bubbles and we won’t cross those bubbles. Everyone has gone through the testing procedure before they’ve gone, and we’ll be really strict with any crossover. We just can’t let that happen. It’ll be almost like football teams at the camp, but they’ll still be able to wave across the lobby at their teammate or whatever,” Winston said.