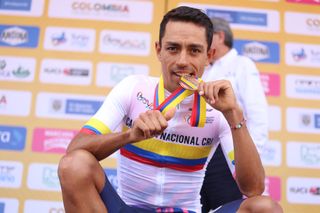 The 23-year-old covered the route in 48:02, 28 seconds faster than Quintana and 32 seconds better than Bernal. The victory over quality competition is a good sign for Martinez going into the 2020 season, when the young rider hopes to focus on the Tour de France.

Martinez missed the Grand Boucle last year after breaking a wrist and thumb in a crash while training in June. He returned for the Pan American Games in August, winning the individual time trial, and then took on the Vuelta a España, finishing 41st overall after nailing down a top-10 in the stage 10 time trial.

Chaves to kick off 2020 season on home soil at National Championships and Tour Colombia 2.1

Bernal also equalled his Colombian time trial result from 2019, when he finished third behind Martinez and Astana's Miguel Angel Lopez.

"I think I should be happy with the result," Bernal said in a statement posted on the Team Ineos website. "This is my first race of the season and I think that, looking at my numbers, I did a really good time trial. I should be happy because my first big goal will be Le Tour de France. I can’t be at 100 per cent in the nationals, but it’s a good test ahead of the next races."

Team Ineos neo-pro Brandon Rivera was fourth on the day, 1:51 behind Martinez, while Esteban Chaves (Mitchelton-Scott) was fifth at 1:57. Lopez, third last year, did not participate.

The Colombian national championships continue Sunday with the road race, a 217km test in Tunja, which will also host the opening time trial for the upcoming Tour Colombia 2.1 stage race from February 11-16.