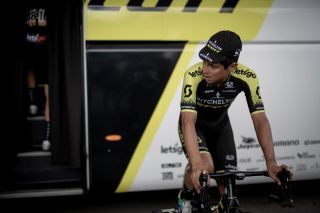 Esteban Chaves (Mitchelton-Scott) will begin his 2020 season on home soil, racing both the time trial and the road race at the Colombian National Championships, held on January 30 and February 2, followed by the Tour Colombia 2.1, where he will compete with the national team from February 11-16.

Chaves said that he's prepared to bring in more results after a successful 2019 campaign.

"The feeling during training has been good and I want to start this year with some really good results and a good taste in the mouth, especially as last year was without interruptions.

"Also, I'm really excited to start in Colombia. It will be the first time I've represented the team in my country. I’ve never raced as professional here in Colombia, so to start the season there will be awesome."

Chaves on the comeback trail at Vuelta a Espana

In recent years, Chaves has struggled with injury and illness. He was forced to miss out on much of the 2018 season due to a virus, but returned last year to win a mountain stage at the Giro d'Italia. Chaves is now hoping to build on that success in 2020 by taking on some new opportunities.

"It will be my first National Championships as a professional rider, so that will be really nice, and I want to race with the team's colours," Chaves said.

The championship event will be held in Boyacá, where Chaves will race in the time trial on January 30 and then the road race on February 2.

"The circuit is a really, really tough one. It's more than 200 kilometres, and it's pretty hilly and at altitude," Chaves said. "Maybe I have a chance to go for the jersey, but there are a lot of strong riders here, with strong teams, while I will be on my own. So it's a bit of a lottery, but I'll be ready, and you never know."

Chaves will then race with the Colombian national team at the Tour Colombia 2.1 stage race, where the 29-year-old will ride in front of his family, friends and fans on home roads.

"It's also my first time at the Tour of Colombia, and I'm pretty excited because this year the race will finish in my hometown and on my home training roads," Chaves said. "I know all of the last two stages like the back of my hand, so it's pretty exciting.

"My family and friends will be there, plus racing in the national team colours is a special feeling. I can't wait, as it will be a really good experience, and Colombian cycling is getting bigger every year. To be part of this generation of riders is amazing."

The Tour Colombia 2.1 starts on Tuesday, February 11, with a 16.7km individual time trial in Tunja.  Stage 2 takes riders 152.4km from Paipa to Duitama. Paipa hosts the start of the 177.7km third stage, which finishes in Sogamoso. Stage 4 is 168.6km from Paipa to Santa Rosa de Viterbo, followed by stage 5's 175km from Paipa to Zipaquirá. The race concludes on Sunday, February 16, with a final 182.6km stage from Zipaquirá to the climb up Alto del Verjón.