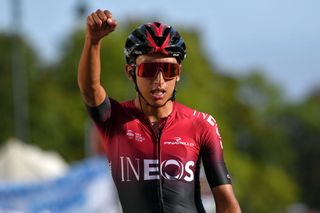 Tour Colombia 2.1 has released the provisional roster for Team Ineos, which will send an all-Latin American squad to the six-day stage race for the first time in its three-year history.

The race starts Tuesday, February 11, with a 16.7km individual time trial in Tunja and concludes Sunday, February 16, with a 182.6km stage from Zipaquirá to the climb up Alto del Verjón, where the ascending talents of Bernal, Caparaz and Sosa are expected to shine.

Bernal won the overall title in Colombia in 2018 ahead of Movistar's Nairo Quintana when the race was called Colombia Oro Y Paz, but he raced in support of Sosa last year, when fellow Colombian Miguel Ángel López (Astana) seized the lead during a dramatic battle up the ascent to Alto de Las Palmas on the final day.

Quintana, who will not race in Colombia this year with his new team Arkea-Samsic, won the stage, but López finished with Sosa to seal the win. Bernal was fourth on the stage after putting in a mighty effort to assist Sosa, while EF Education First's Rigoberto Uran was fifth.

Carapaz, who moved to Team Ineos this year after three seasons with Movistar, has ridden the previous two versions of the Colombian race, finishing ninth overall last year after riding in support of Quintana. He was third on the difficult fifth stage to La Union, making the dangerous breakaway with eventual stage winner Julian Alaphilippe (Deceuninck-QuickStep) and three others, including López, Martinez and Sosa.

For this year, Tour Colombia previously announced that Fabio Aru would compete along with the UAE Team Emirates squad. Other WorldTour teams expected include Deceuninck-QuickStep, Movistar, Israel Start-Up Nation and EF Education First. From the Pro Continental ranks, Arkea-Samsic, Rally Pro Cycling, Bardiani-CSF-Faizanè and Androni Giacattoli are expected, among others.