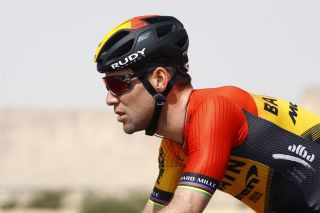 Mark Cavendish says he 'feels like a cyclist again', with a new lease of life at Bahrain McLaren. The British sprinter made his debut for his new team at last week's Saudi Tour, where he told Het Nieuwsblad he has become immune to the criticism he's faced in the past few years.

"All that shit in your magazines or on Twitter, it doesn't hurt me," he said, according to the Belgian newspaper.

The perceived criticism stems from the fact that Cavendish, winner of 30 Tour de France stages, hasn't won a race in two years, having suffered with Epstein Barr virus.

"If I get criticised today because I don't win anymore, it mainly indicates that I have won a lot in the past," Cavendish said. "95 per cent of cyclists never win a race, so I can be quite satisfied with what I have already achieved."

Mark Cavendish's Olympic dreams over after missing out on Track Worlds

The 34-year-old didn't get back to winning ways at the Saudi Tour, and instead found himself working for fellow sprinter Phil Bauhaus, who won two stages and the overall title.

"The feeling of winning again is fantastic," Cavendish said, playing down the notion that personal glory is all that matters to him.

"It is the role of every cyclist to ensure his team wins. Usually this means I will be sprinting, but it doesn’t mean I don't know what to do in another role, or that I can't enjoy it. A job is a job. By the way, I rode in the mountains to help [Bradley] Wiggins win the Tour de France. It's nothing new."

In what can be construed as a subtle dig at Dimension Data, for whom he raced from 2016 to 2019, he added: "I have always ridden for teams that could control and dictate a race. That was clearly different in recent years. At Bahrain McLaren I am once again in a squad that can dictate how a race goes. That gives me confidence."

Cavendish insists that he's fully healthy again. While the Epstein Barr virus will always be present in his body, it's no longer 'active' and no longer getting in the way of his training or racing.

"It's hard to say [if I feel as good as three years ago]. Three years is a long time. But I feel like a cyclist again," he said.

"I can go deep again, I can train well again. But that was also the case last year. I am especially pleased that there are still intelligent people in the sport who understand that I still have the ability to continue as a professional cyclist. Like Rod [Ellingworth – Bahrain McLaren manager]. Many so-called friends have dropped me. Not him. I owe him a lot."

Cavendish said the 'most important thing' is that he 'feels good' again, and was reluctant to think about when and where the wins might resurface.

Asked if he could say what results he'd be happy with this year, he simply said: "No."

As for whether his ambition to surpass Eddy Merckx's record of 34 Tour de France stage wins is still alive: "Not at this moment. But if you ask me about it in every interview, I can't help but think about it. July is still far away. I am currently happy with where I am now, okay?"