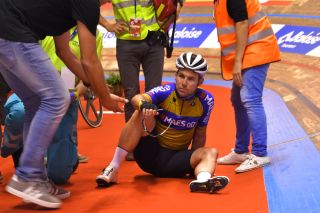 Mark Cavendish's hopes of adding an Olympic gold medal to his palmarès were dealt a terminal blow on Monday as he was not named in the Great Britain squad for the upcoming UCI Track World Championships.

Cavendish had hoped to ride the Madison at the Tokyo Games this summer but needed to participate in prior international events in order to meet the qualification criteria.

Despite earning qualification points while riding a string of track events over the winter, Cavendish needed to appear at the World Cup series or World Championships to be eligible for Tokyo.

After missing out on the final round of the World Cup at the end of last month, he was excluded from Great Britain's squad for this month's Worlds, which was announced on Monday.

"The World Championships in Berlin mark an important milestone on the path to the Olympic Games for the track cyclists and, as has always been our clear intention for this stage of the cycle, our focus now is on those riders who we believe have the potential to win a medal in Tokyo," said performance director Stephen Park.

Cavendish had voiced his desire to ride the Madison in Tokyo, with the event returning to the Olympics for the first time since 2008, when Cavendish rode with Bradley Wiggins and the pair - world champions at the time - finished a disappointing eighth. Cavendish was the only member of GB's track team to leave Beijing without a medal and, although he grabbed an Olympic silver in the Omnium in Rio in 2016, he since still harboured hopes of gold.

Cavendish, a three-time Madison world champion, faced competition for selection from riders more focused on the track, given there are just five spaces in the endurance squad, four of which will be an established team pursuit quartet. Cavendish was ready to step in to the pursuit squad in Rio but hasn't been part of the team in this Olympic cycle.

"You still want to have five that can ride the team pursuit, so to have someone who is solely a madison specialist in there and doesn't have any other availability isn't the perfect scenario," said coach Iain Dyer in December.

Expected to ride the Madison for Great Britain in Toyko are Ethan Hayter and Ollie Wood, who won silver medals at the Glasgow and Milton World Cups and have also raced in the team pursuit this winter.

Both were named in the seven-man endurance squad for the Worlds in Berlin, alongside multiple Olympic champion Ed Clancy and Charlie Tanfield, both of whom are key parts of the pursuit team. Rounding out the endurance squad for Berlin are Kian Emadi, Mark Stewart, and Matt Walls.

Elsewhere, the Great Britain team for the World Championships is headlined by Laura and Jason Kenny, who have four and six Olympic gold medals, respectively.