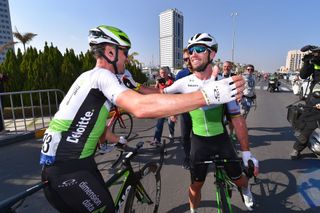 Eisel and Cavendish embrace after a stage win at the 2018 Dubai Tour (Image credit: Getty Images)

Mark Cavendish has paid tribute to Bernhard Eisel after the 38-year-old announced his retirement on Wednesday, saying he and the Austrian were "closer than teammates, closer than friends".

Cavendish and Eisel were teammates for 10 years, riding together at the T-Mobile/HTC organisation, and later at Team Sky and Dimension Data.

Cavendish turned professional with T-Mobile in 2007, the same year Eisel joined from FDJ, with the Austrian becoming a key part of the engine room that helped Cavendish to 20 Tour de France stage wins in four years.

Bernhard Eisel: The five races that changed my life

A hole in the head: Bernhard Eisel and the long fight back

When Cavendish moved to Team Sky in 2012, Eisel moved with him, and Cavendish won another three Tour stages, while Bradley Wiggins won the overall title. Cavendish only lasted a year at Sky before moving to QuickStep, but Eisel stayed with the British team for another three years.

The reunion came at Dimension Data in 2016, where the pair, along with lead-out man Mark Renshaw, combined as Cavendish won four stages at that year's Tour. Things became complicated in the following years, with Cavendish suffering from Epstein-Barr virus and Eisel suffering a major brain injury in 2018. Eisel returned to race a full season in 2019 but, despite toying with the idea of carrying on into 2020, announced his retirement on Wednesday.

"Genuinely cried reading this," Cavendish wrote on social media in relation to the statement issued by Eisel.

In his statement, Eisel had referred to himself, Cavendish, and Renshaw as 'the three musketeers', with the Manxman the last of the trio still racing as Mark Renshaw also retired at the end of last season.

Cavendish will race for Bahrain-McLaren in 2020, hoping to return to his best under the tutelage of his old coach Rod Ellingworth.

Genuinely cried reading this. Closer than teammates, closer than friends, we’re brothers. I could never win an argument with you, but I could never win anywhere near the races I have without you. Thank you for all you’ve done for me, the peloton and cycling. Love you mate ❤️ https://t.co/FfVzWeXd2JJanuary 14, 2020