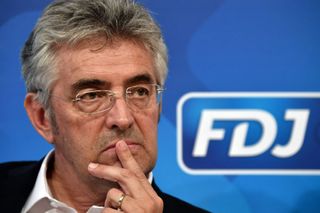 Groupama-FDJ manager Marc Madiot has added his voice to a considerable backlash against France's sports minister, saying he was "dumbstruck" by her recent comments that "sport won't be a priority in our society".

Roxana Maracineanu caused quite a stir when she appeared on Eurosport's 'Le Club' programme on Wednesday evening and insisted "it won't be the end of the world" if the Tour de France and other events did not go ahead this year.

"I'm struggling to believe they came from the minister for sport, who's there to defend sport. Sport is an important economic driver. It's not only professional athletes; a lot of families live for sport. In cycling, it also concerns bicycle manufacturers, for example."

Tony Martin: No Tour de France would be disastrous from a commercial point of view

Maracineanu did not give much cause for optimism about professional sport returning this year. She mentioned a return date of mid-June, a month after the proposed lifting of lockdown, but warned it could not happen if testing and other health resources are not in place.

She added that any sport that did take place would do so behind closed doors, suggesting the ban on public gatherings, set to last until mid-July, would have to be extended until "at least September" and possibly beyond, "until a vaccine is found".

Such a scenario would spell trouble for the Tour, rescheduled for August 29-September 20, after race director Christian Prudhomme ruled out holding it behind closed doors.

What has landed Maracineanu in hot water, however, is her assertion that: "Sport will not be prioritised in our society. It's not a priority today in the decisions taken by the government."

Two of the predecessors in her role gave the same quote to sports newspaper L'Equipe: "A minister for sport should not be saying that."

One added: "It gives the impression of a totally fatalistic minister and, in politics, fatalism kills."

Patrick Kanner, a senator whose ministerial remit under Francois Hollande's presidency included sport, added: "The sporting world is going through an extraordinary crisis and is paying in cash for the coronavirus. It could expect a more positive message, and she has to defend it and fight for its priorities."

As for the remark that "it's not the end of the world" if the Tour – along with tennis tournament Roland Garros – doesn't go ahead this year, another anonymous government source gave a critical reaction to L'Equipe.

"The comment is misjudged. If the Tour doesn't go ahead, it's excessively serious. There's a whole ecosystem that revolves around it and which, like tennis, does not function without that source of income."

Such was the backlash, Maracineau sought to clarify her comments and defend her position on Thursday by issuing a statement.

"Among all the challenges our society faces, evidently the return of sport is a major topic. I've been working on it daily for weeks. But health remains the priority," she said.

"I've always believed that sport has a major role in our society, and this conviction is only strengthened by the crisis. The return of sport is essential to the return of daily life. But let's remain lucid and patient. Today, our priority is the health of French people."