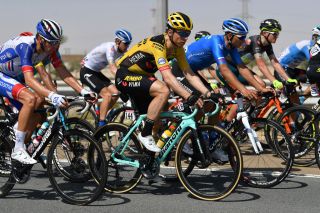 Jumbo-Visma's Tony Martin said on Thursday that if the 2020 Tour de France doesn't happen at all as a result of the coronavirus pandemic continuing, then the consequences for professional cycling could be dire from a commercial point of view, and may signal the closure of some pro teams.

A big question mark remains over the running of this year's Grande Boucle, which is now set to run from August 29-September 20, if it's deemed safe to do so. The organisers, and most of the riders, teams, sponsors and fans, would like to see the 2020 edition take place; various health experts, meanwhile, have stated that scheduling the Tour later, or not at all, would be more prudent as the COVID-19 crisis continues, while France's sports minister, Roxana Maracineanu, suggested this week that bans on public gatherings could continue into September.

Giving his opinion to L'Equipe on Thursday, Tony Martin said: "For now, we can't exactly predict the consequences of the possible cancellation of the Tour de France. I think it would be a death sentence for one or two teams.

"Without being too dramatic, I think a lot of sponsors invest in cycling because of the Tour," the four-time time trial world champion continued. "If there is no Tour, then it'd be disastrous for the sponsors from a commercial point of view. I hope we don't get there. But if it's cancelled, sponsors will have to think long term.

"In 2021, the Tour de France will take place – we're relatively certain of that. Before that, there'll be other great races, and there'd still be a lot of interest in the other end-of-season races without the Tour," Martin said, referring to the likes of one-day races the Tour of Flanders and Paris-Roubaix, which may both take place in mid-to-late October. "But I'd be very happy if the Tour takes place as planned at the end of August."