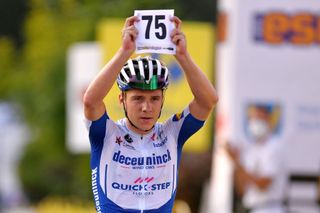 Remco Evenepoel (Deceuninck-QuickStep) rode away from the entire field on stage 4 of the Tour de Pologne with over 50 kilometres to go and dedicated his win to Fabio  Jakobsen - his teammate who was left in an induced coma for two days following  a stage 1 crash.

Evenepoel attacked a high-class WorldTour peloton with 51km remaining on Saturday and put close to two minutes into his chasers by the time he crossed the finish line. He now leads the race by 1:48 from Jakob Fuglsang (Astana), with Simon Yates (Mitchelton Scott) at 2:22.

Baring accident or major surprise, Evenepoel will wrap up the GC on Sunday, but it’s the sight of him crossing the line on stage 4 and holding up Jakobsen’s race number that will become one of the most memorable images of this year’s race.

The Dutch national road champion was forced into barriers on stage 1 and crashed through them. He was put into and induced coma and suffered severe facial injuries. He spent close to six hours in theatre but was taken out of his coma on Friday. Dylan Groenewegen, who caused the fall after he changed his racing line, was disqualified and faces further punishment from the UCI.

Tour de Pologne stage 4: Remco Evenepoel in a league of his own

Trentin: Everybody is to blame for Jakobsen crash

"I wanted to give everything today for Fabio. After stage 1, we all had some pretty tough moments, but stayed together and I think the whole world saw today just how strong this team is," Evenepoel said after his win

"The good news we received yesterday about Fabio acted as a big morale-boost and for that reason I wanted to do something today. That’s why in the morning, before the start, I asked for his race number and the moment I had it in my hands I immediately felt something special.

"It wasn’t easy, and I suffered, but it doesn’t compare to what Fabio’s enduring these days. This gave me the energy to carry on and never look back."

Overnight race leader Richard Carapaz (Team Ineos) was involved in a crash but nothing could take away from Evenepoel who has won every stage race that he has entered in 2020.

"The plan was to attack, not too early, but feeling that everybody was on their limit I just went with 50 kilometers to go. Up until then, the guys did a great job for me, protected me from the start of the day, and I wanted to repay them for that," he explained.

"When the info came from the car that I had a small gap over the chasers and that nobody could follow, it gave me even more confidence, so I just kept a high pace, without going over my limit, all the way to the end. I’m happy with this win and with having the yellow jersey with just one day to go."