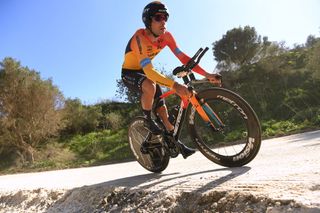 Mikel Landa (Bahrain McLaren) will miss the upcoming Paris-Nice, which starts on Sunday, due to having suffered a cracked rib from when he was hit by a car while training at the start of February. The Spanish rider nevertheless started his season at the Ruta del Sol later in the month, and finished third overall, but will now take a break from racing to allow the injury to heal.

"I'm disappointed to be missing this famous race, and was looking forward to competing with my Bahrain McLaren teammates in front of France's passionate fans," Landa said in a press release on Thursday. "The best thing for me now is to train and get back in full shape as soon as possible, and I look forward to competing again soon – fully fit."

With the coronavirus continuing to dominate the news, concerns in Italy, in particular, have led to the cancellation of this Saturday's Strade Bianche, and the probable cancellation of next week's Tirreno-Adriatico and Milan-San Remo on March 21.

Paris-Nice, in neighbouring France, appears likely to go ahead, however, now with 19 teams of eight riders, rather than the original 17 teams of seven riders, both in order to accommodate more riders, who in many cases were set to ride Tirreno-Adriatico, and to make up for those teams that have decided to pull out of Paris-Nice.