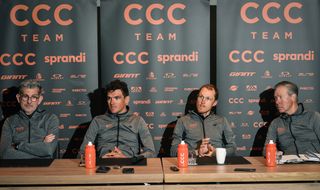 CCC Team have announced that they will not participate in Paris-Nice or Tirreno-Adriatico next week due to concerns about the spread of the coronavirus Covid-19. It means that five WorldTour teams have now ruled themselves out of Paris-Nice, while a total of nine teams have withdrawn from Tirreno-Adriatico.

In a statement on Thursday afternoon, manager Jim Ochowicz criticised the UCI for what he termed its “lack of direction […] at this critical moment in the sport.”

This weekend’s Strade Bianche and GP Larciano have already been postponed following the implementation of new restrictions on gatherings in Italy to counter the spread of the coronavirus, but organiser RCS Sport have yet to make a decision regarding Tirreno-Adriatico and Milan-San Remo.

Following the cancellation of Strade Bianche, it was initially suggested that CCC Team’s Classics leader Greg Van Avermaet might compete at Paris-Nice rather than Tirreno-Adriatico, but the team has since decided not to ride in either of next week’s WorldTour stage races.

CCC Team doctor Max Testa explained the team’s rationale, citing concern about the spread of Covid-19 and the risk of having riders quarantined on returning to their home countries after the events.

“Cycling is a unique sport with teams traveling from town to town on a daily basis at stage races, staying in different hotels every night, and coming into contact with the general public in a largely uncontrolled environment. The health of riders, staff, and the general public is the priority and with many unknowns around what protocols can viably be put in place at stage races, we believe our withdrawal is the right decision,” Testa said in a statement on Thursday afternoon.

“At this point in the season, instances of Upper Respiratory Tract Infections (URTI) and fever are high and it is inevitable that riders and staff will fall ill during the races. Without a detailed quarantine plan, and rapid testing protocol and delivery of results, teams are actively putting riders and staff at risk of exposure, transmission, and quarantine.

“We also need to think about the risk of quarantine for our riders and staff when they return to their home countries from these races. For these reasons, we have decided to withdraw from Paris-Nice and Tirreno-Adriatico.”

CCC Team thus follows Mitchelton-Scott, Astana Pro Team, Team Ineos and UAE Team Emirates in withdrawing from both Paris-Nice and Tirreno-Adriatico, while a further four teams – Groupama-FDJ, AG2R La Mondiale, EF Pro Cycling and Jumbo-Visma – have signalled their intention to skip the Italian race even if it were to go ahead.

“It was not a simple decision to withdraw from Paris-Nice, or Tirreno-Adriatico, which we expect to be officially cancelled in the wake of the cancellation of Strade Bianche,” said manager Jim Ochowicz.

“We are acting in the best interests of our riders and staff, and taking responsibly to reduce the risk of transmission at these stage races. The situation with COVID-19 is changing rapidly and we will continue to monitor the evolving situation and adjust our race calendar accordingly.”

Although France now has 377 cases of Covid-19 spread across the country, ASO have continued to plan as though Paris-Nice (March 8-15). will take place. Following the spate of withdrawals on Wednesday and Thursday, the race organiser has reportedly allowed teams to field eight riders rather than seven, and has issued late invitations to Circus-Groupe Gobert and B&B Hotels-Vital Concept to compete.

“We wish to express our ongoing support for both the ASO and RCS,” Ochowicz said. “However, we stand disappointed with the lack of direction by the UCI at this critical moment in the sport as all men’s and women’s teams have been left to fend for themselves.”