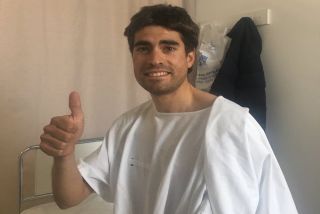 Mikel Landa was hit by a car while training on Saturday morning, with the driver failing to stop.

Landa was taken to hospital for check-ups but serious injury was ruled out and he's expected to resume training in the coming days.

Landa was training with a friend near his home in Alava, in the Basque region of Spain, when the incident occurred.

"This morning, while I was training with a friend, a car hit us from behind and took off," Landa wrote in a social media post, along with a picture from hospital.

"The first tests confirm that everything is ok. I hope to return to training in the coming days."

Landa is set to start his 2020 season at the Ruta del Sol stage race in southern Spain on February 19. It will be his first outing for his new team, Bahrain McLaren, ahead of a bid for Tour de France glory in July.

According to Spanish newspaper Mundo Deportivo, the culprit, who was driving a Renault Megane, has been arrested. The 42-year-old suspect is believed to have caused another crash in Burgos a few hours previously.