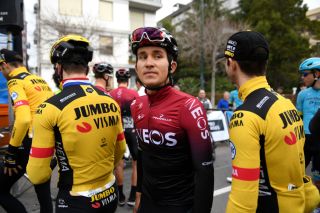 Michal Kwiatkowski (Team Ineos) heads to Strade Bianche this week, racing for his third victory in the Italian WorldTour event after climbing to the top of the podium in Siena in 2017 and 2014. The race is normally held in March in cooler, wetter conditions, but this year has moved to August 1 after being postponed because of the coronavirus pandemic. The former road race world champion says that the hot, dry weather has made the gravel sections "super dangerous".

"From what I saw on today's ride – we did the recon of the last 75 kilometres – and compared to racing it in March, the sections of gravel are just looser," Kwiatkowski said in a virtual press conference on Thursday.

"It's dustier, so obviously everybody is going to just have less grip. It's not like racing on ice; I'd compare it more to racing on snow. It's not very grippy in March, but nothing like we have now. There are plenty of little rocks and dust, and everything like that, on the road.

"It might be hard for someone who's never done the race because the dynamic of the peloton is going to be completely different, and the braking power that we have on the bikes now is just nothing compared to what we were used to. I think that it's going to be a super dangerous race – risky – but it's Strade Bianche. This is what we're dealing with."

Kwiatkowski said that there is only so much riders can do in terms of equipment to prepare specifically for the gravel because the last, long sector – the 11.5km sector 8 at Monte Saint Marie – is more than 40km from the finish. After that, there are only three shorter stretches of gravel and 10km of asphalt.

"It's nothing like choosing a bike for the cobbled races. You want to find a balance between comfort and safety, and actually the performance on the bike. The last steep climb in Siena, climbing up that ramp, is sometimes where you can win or lose the race. You want to have a light bike there as well, just with good equipment to maybe win a final sprint."

At 184km, Strade Bianche is on the shorter side for a WorldTour one-day race. But with 63km of white gravel roads spread across 11 dusty sectors, and several climbs, including the brutally steep pitch to the finish line in Siena, debilitating cramps – like those that hit Wout van Aert on his debut in 2018 – were already a factor in March. The forecast for Saturday calls for a very hot day, with temperatures soaring to 37°C, and Kwiatkowski says that staying hydrated will be crucial.

"Obviously it wasn't the case in March that we were ever racing in such heat," he said. "Apart from planning a fuelling strategy for the race, we have to also plan the hydration side of it – the extra feeds, what we should drink, how many bottles we should drink during the whole race. It's pretty crucial. The last thing you want to do is end up with cramps at the end of the race."

It will also be a rude awakening for many riders in the peloton, having been away from competition since early March. Riders' form has been carefully hidden in power files exchanged with coaches instead of being displayed on television. But Kwiatkowski says he's ready.

"I treat everyone in front of me as a potential danger," he said. "At this race, in particular, you have to stick to one guy, and you have to be really careful with your position coming into the [gravel] sectors, and coming out of the sectors – making sure that you're leading the team quite well in terms of what you really want, what you really need.

"Obviously, there are a number of guys who can potentially win the race: last year’s winner Julian Alaphilippe [Deceuninck-QuickStep], Jakob Fuglsang [Astana], Greg Van Avermaet [CCC Team], and even Mathieu van der Poel [Alpecin-Fenix]. He'll be up there, and he can do absolutely anything he likes, from what I can see.

"You do need some luck at this race, but if you get that and have the strength at the end, the strongest guys win," Kwiatkowski continued. "Van der Poel has proved already at previous races on the road that he's the strongest guy in the peloton. I think he's the favourite."

After five months away from racing, it's difficult to make predictions or plans on how a race will go, but Kwiatkowski said he's putting his faith in the preparation he did leading up to the race, which included altitude camps on Mount Tiede in Tenerife and at Isola 2000 in France, in addition to time spent in an altitude tent at home.

"Everybody will know much more with 40km to go. You'll be able to see on television who's there and who's not. For me, it will be kind of the same," said Kwiatkowski. "Before the race, I can say absolutely anything, but it's all about those last kilometres. Then I'll start thinking about race tactics. But before then, it doesn't really matter who's there."

Racing stopped in March when the COVID-19 pandemic took off across Europe and lockdowns in numerous countries helped to stem the tide of deaths. Cases in Spain, Belgium and Italy are going up again, and UCI president David Lappartient said that while cycling's restart sends a positive message, especially to Italy, which was hard-hit earlier this year by the virus, any race is at risk of cancellation.

Kwiatkowski emphasised personal responsibility, saying he's done everything he can to be safe: he can travel by car to most races, reducing the risk of infection during travel, and says he has confidence that Team Ineos are taking all the proper steps.

"I'm doing everything possible," he said. "If I knew that everybody next to me was doing the same thing, then I would be sure, but you can never be 100 per cent sure about it. So I'm treating whoever I meet as a potential risk."

That said, considering that several riders were forced to drop out of the Vuelta a Burgos after being named as possible direct contacts to positive COVID-19 cases, Kwiatkowski said he packed his suitcase as if he might be stuck in quarantine.

"I only came for two races. I'm coming back home after the Trittico Lombardo, but I packed my suitcase for a potentially longer period. I know there's the risk that if someone tests positive in the peloton, it might be a possible shutdown and a quarantine for most of us. I'm mentally prepared to stay somewhere in a hotel for a longer period.

"I'm doing – and everybody should do – everything possible to prove that racing can be safe. Cycling should do absolutely everything to prove that we can race in a safe way. It's what fans need, what we need and what the business side of cycling needs, and I think we can show that it's possible. It's all about how we deal with it. If everybody stays professional, and does what they have to do, I think we'll be fine."

Kwiatkowski likened dealing with the coronavirus to everyday pro racing.

"You always have to be professional: you get on the race and there is a gravel section and a risk of crashing on the gravel on a corner. But if you're professional and do the right thing – if you think about what you can do, about slowing down, making sure you have the right tyre pressure, and stuff like that – the fear is gone. Of course, there is always a risk that someone can crash into you, and that's the same situation as with the coronavirus.

"There'll always be someone who is maybe not doing the right thing to stay healthy and safe," he said. "But we believe, and the UCI believes, that everyone should stay at the same level of professionalism in terms of staying healthy. Fear shouldn't exist if you're doing the right thing."