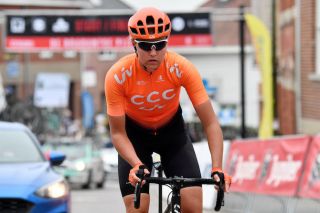 CCC-Liv's Evy Kuijpers is back training for the 2020 season earlier than had originally been expected following the bunch-sprint crash that saw her and a number of other riders – including Australia's Chloe Hosking (Ale Cipollini) and Great Britain's Elinor Barker (Drops Cycling) – hit the ground at the finish of the one-day RideLondon Classique in early August.

Hosking out of Tour of Scotland after RideLondon Classique crash

WNT-Rotor's Kirsten Wild was first across the finish line, but was relegated for having been judged to have caused the crash after moving off her line with around 100 metres to go. Parkhotel Valkenburg's Lorena Wiebes – who finished second – was handed the win following the commissaires' decision.

Barker broke her collarbone, while Hosking was left nursing concussion. Kuijpers' back injury, meanwhile, was deemed serious enough to rule her out for the rest of the season, and, while that has proved to be the case, the 24-year-old has now returned to training, considerably ahead of schedule.

"It was expected that I would have needed eight-to-12 weeks for the recovery, but I only needed seven," she said on the CCC-Liv website. "As a top athlete, I may be a bit fitter than some others, but, even so, this is particularly fast. It's probably because the team didn't lose any time and I was quickly referred to the right experts, resulting in the correct exercises.

"I am completely recovered," Kuijpers continued. "I have no more complaints and I don't have any permanent damage. Although it could have ended differently, because the crash was less innocent than it looked at first."

The pain of crashing was lessened partially, too, by the fact that Kuijpers was handed a contract extension the next day, which came mid-way through what was only her first season with the Netherlands-based team, which is also home to Dutch star Marianne Vos and South African climber Ashleigh Moolman-Pasio.

"There are no more road races this season," said Kuijpers, "so I therefore have to continue to build on the basis of this year and ensure that I'll be back next season.

"This year I've made tremendous progress; hopefully I can take another step forward in 2020," she said. "I'll try to have some variety this winter, including mountain biking, power training and road trips. As I've been out of competition for almost two months, I'll also compete in a few national cyclo-cross races in order to experience that [competitive] drive in a race."