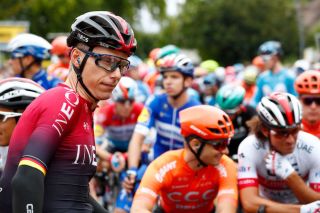 German rider Christian Knees has re-signed with Team Ineos for a further year, with 2020 set to be his 10th season with the British WorldTour squad.

38-year-old Knees joined what was then Team Sky in 2011, a year after its inception. Since then, he's been part of the squad for two of the team's seven Tour de France wins and helped Chris Froome to victory at both the 2017 Vuelta a España and the 2018 Giro d'Italia.

Christian Knees: Sivakov is looking strong at the Giro d'Italia

In all, Knees has ridden 20 Grand Tours and 30 Monuments so far in a career that started with 'division two' German team Wiesenhof followed by four seasons with Milram. Along the way, he's won the Rund um Köln, the Bayern-Rundfahrt and the 2010 German road race championships, but has predominantly made a name for himself as a talented and reliable domestique with the British team.

"I could never have imagined when I signed that I'd be on the team for 10 years," the 38-year-old said on his team's website. "But I knew when I looked at the riders the team had, even back then, that it was a really strong set-up.

"To stay for so long on a team like this – which has now won the Tour de France seven times – it shows you can't be too bad as a bike rider," Knees said.

"I'm really happy to extend my time with the team," he continued. "I feel very comfortable here, and to be going into the my 10th year with the team next year is a great achievement. I'm really pleased that I can still continue to do what I love."

'The young, up-and-coming guys give me motivation'

While Knees acts as a trusted domestique to the likes of team leaders Froome, Geraint Thomas, he's also taken on the role of somewhat of a father figure to the squad's younger riders.

"I've always been somebody who likes to encourage the younger guys along and help them if they need advice, as well as being there as a role model if I can be," Knees explained. "As a rider who has done 20 Grand Tours, they can see you and look at what you're doing to get through a three-week race. They can try to emulate that. Trying to help the developing riders out is something I really enjoy.

"On the other hand, it's still a competition within the team. So these young, up-and-coming guys give me motivation, and I know I need to be on a high level to be selected for races. It's a win-win situation," he said.

"Not only is Christian going into his 10th season with the team, he's been a pro for 16 years. His professionalism is second-to-none. For the young guys on the team, he shows how pro cycling should be in the way that he commits to his training and his racing.

"He's versatile, and he can do any type of race the team calls upon him for. There are not many riders still racing in the peloton with that amount of experience," said Bryan.

"He knows what it takes to perform right through the season, and be as good from day one as he is at the end. That's something young guys can aspire to."