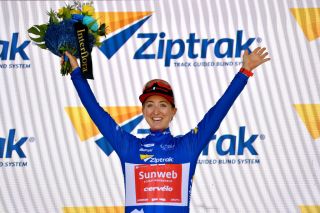 Leah Kirchmann has renewed with the Sunweb women's team for an additional two years taking her through the end of 2022. In a team press release, the Canadian time trial champion said the team was the best place for her to continue to develop as a rider and mentor new athletes.

"I am happy to extend my contract with the team for another two seasons," Kirchmann said. "I am impressed with how the team has adapted to the challenges posed by the current global pandemic, prioritising the health of riders and staff, while modifying the program to focus on the future.

"I believe that this is an environment where I can continue grow and develop as a rider, while also helping to mentor those around me."

Sunweb are one of few teams announcing rider contract renewals at this time. Due to the COVID-19 pandemic all racing has been cancelled until July 1, and August 1 for men's and women's WorldTour events. Cycling teams largely depend on sponsorship funding, however, the pandemic has impacted many businesses making the future of some teams uncertain.

Kirchmann joined the team in 2016 under the co-title sponsors Liv-Plantur, and she has excelled in the programme during her five years of racing overseas. The year before moving to the team, she won two stages of the Amgen Tour of California. She went on to win a stage and placed 8th overall at the Giro Rosa, two-time winner of Grand Prix Gatineau, winner of Drentse 8, second place at La Course, third overall at Ladies Tour of Norway and Tour of Chongming Island, and third at Prudential Ride London.

"Kirchmann has proved herself to be a versatile rider that can handle a multitude of terrain," read a team statement. "Alongside good GC showings she has taken prologue and time trial wins, been an integral member of the team time trial successes ... Kirchmann’s all-round abilities make her an important member of the team and she’s more than willing to go all-in to support her teammates."

Sunweb also announced that Franziska Koch has renewed a one-year contract with the team, after signing on as a trainee in August last year. This season, Koch helped set up teammate Floortje Mackaij for a third-place finish at Omloop Het Nieuwsblad.

"I’m really happy to stay and keep on working with Team Sunweb next year. The team gives me the best possibilities and opportunities to develop into a world class rider and I am looking forward to making the next steps in my development with them," Koch said.

Happy to announce my contract extension with @TeamSunweb until 2022! 🤗 Find the full press release below -> https://t.co/VL5sCEQYnwApril 24, 2020