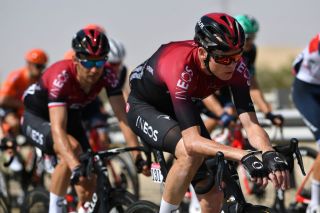 In the grand scheme of things, five days of racing at the UAE Tour were unlikely to shed any true light over Chris Froome's long-term comeback from serious injury, or his hopes of claiming a fifth Tour de France title in July, but, according to his Team Ineos coach Tim Kerrison, the British rider is making all the necessary steps to return to the top of professional cycling.

Kerrison arrived in the Middle East halfway through the ill-fated UAE Tour, with the plan for him and Froome to venture to South Africa for a block of training after the race concluded. The pair made it to their destination albeit after a spate of coronavirus cases, quarantine and delayed travel, but before the race ended in bleak abandonment, Kerrison spoke to Cyclingnews about Froome's path to recovery.

"It's great that Chris is back riding. I think that everyone can see that he looks well. For the last weeks he's been able to progressively train normally. That's a milestone. Obviously the level isn't there yet but we're building the intensity and the volume back into the training," Kerrison told Cyclingnews just after Froome had completed the second summit finish of the race on stage 5.

"I'm sure he's said this, but we're monitoring things closely with the balance between left and right. I've been reassuring him all along that once he's able to do normal training, we're very confident that things will return very quickly."

Froome's comeback from a career-threatening crash during last year's Critérium du Dauphiné has been well-documented, but during the UAE Tour he opened up to the media about the struggles of learning to walk again and how he had been forced to go under the knife once more after picking up an infection in December of last year. The four-time Tour winner admitted that one of the key breakthrough moments in his career came when he stepped into a swimming pool for the first time after his crash, and how even the easiest of exercises felt like a liberation.

When the same question over breakthroughs was put to Kerrison, the coach picked a phase rather than a moment, highlighting the point in time at which Froome could begin training at a consistent level.

"For me I guess it was probably not so much getting back on the road or the bike but getting back into something that resembled more of a normal training pattern and the type of efforts that he would be doing at this time of year. Everyone sees it through their own lens, and I see it partly that way because I was off doing some other things for a while and then we came back together.

"But he made significant progress in the six weeks leading up to here, both on and off the bike. This event was confirmation that he could race again. Of course he's not yet at a competitive level but his weight is good for this time of year and from here we'll move to a phase where he can get into as normal training as possible. He needs to move on a bit more than he would typically at this time of year but that will come with the training," Kerrison said.

"Where he's able to get to between now and July, only time will tell, but things are looking good."

'It's been an ongoing review'

Due to the nature and seriousness of Froome's injuries, Kerrison says that it was always difficult to put an exact timescale on the rider's return. Much depended on the speed at which Froome's body healed, as well as the rider's strict rehabilitation regime.

"It was progressive, really, because we didn't know how long it would take in term of recovery," he explained. "We had some different plans right at the beginning but it's been an ongoing review. Of course, right at the beginning he wanted to start racing as soon as he could, but at the time we didn't know if that would be in early January or late January or February. As it turned out, this was the right time. The performance here has been confirmation."

For now, at least, Froome's next racing appointment will take place later this month at the Volta a Catalunya, which runs from March 23-29. Should the race go ahead in the current coronavirus climate, it will provide a far sterner test than the UAE Tour, with a deeper field and more demanding terrain.

While progress certainly needs to be made in terms of form and fitness, and although the UAE Tour was a huge step in the right direction, Kerrison is adamant that no risks will be taken over Froome's long-term health.

"Like everything, you need to weigh up the risks and the benefits. We were aware right from the beginning that this is elite sport, and it's in everyone's interest to get back as quickly as possible, but not at the risk of his long-term health," he said.

"Right at the start, we said that we wouldn't do anything hastily and rush back if there were going to be any long-term costs. We wanted to do everything to get back as quickly as possible but not if it was going to take one or two per cent off where he could be long-term."