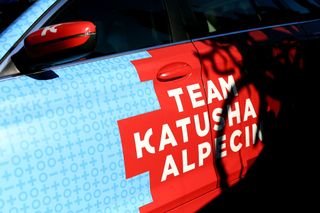 Apparel brand Katusha Sports announced Friday that it would become the co-title sponsor of an existing women's professional cycling team in 2020. A representative of the company told Cyclingnews that after 10 years of sponsoring men's cycling, it was time to invest in women's cycling and develop parity inside the sport.

"The fact that we are more than 50 per cent women who work at Katusha Sports, I can say 'yes' it is about gender equality," a Katusha Sports spokesperson told Cyclingnews.

"Clearly, for many and most cycling companies, they see men's cycling as the strongest thing to go for because it has more coverage and more viewers. The truth is that women's cycling is never going to grow unless we start investing in it.

"Katusha Sports felt that it was time to invest in women's cycling, in one way or another. We needed to put our money where our mouth is, so to speak."

Katusha Sport has financially backed men's cycling at the WorldTour level for 10 years. The company took over as title sponsor of the former team Tinkoff Credit Systems, then owned by Russian billionaire Oleg Tinkov. In 2008, Tinkov transferred the organisation and structure over to Igor Makarov and his company Areti International Group along with Katusha Sports and German shampoo manufacturer Alpecin.

But the Katusha-Alpecin team's future has been in doubt since the summer when Alpecin and bike sponsor Canyon announced they were ending their backing. It was recently announced that Katusha and current Professional Continental team Israel Cycling Academy (ICA) will venture on a three-year agreement.

According to the announcement, ICA will be managing the team, which will include a majority of riders and staff currently under contract with Team Katusha-Alpecin. Katusha will remain a partner and as such, will continue to provide clothing to pro riders as it did for the last three years. Also, Katusha Sports would co-title a women's programme.

A spokesperson from Katusha Sports told Cyclingnews that plans to partner with a women's team had started last winter and that an agreement was made with an existing team in June.

Katusha Sports will announce the partnership as early as next week.

Katusha Sports will not be acquiring the women's programme, but instead, co-title the team and provide additional financial backing and support throughout the season. The team will maintain its current structure, along with equipment and other sponsors.

"Starting our own women's team was not something we considered at this point because there was a lot of unknown with Katusha-Alpecin this year. We were more comfortable and confident going into an established programme," a spokesperson told Cyclingnews.

"We are the headline sponsor. It will be separate from the men's team. Katusha Sports will be sponsoring two teams. As far as our involvement with the team, we are there to support then 100 per cent in any way we can. Katusha Sport will be creating content around the team, reaching out to media, and increase visibility, as any good sponsor would.

"It is a financial contribution, as well. We will be increasing the budget of the team."

Katusha Sports view the partnership with a women's team as an opportunity to continue developing its clothing range. According to a press release, it will be using the pro teams as a focus for research and development, to be able to offer the best in cutting edge technology, function and style for both the men's and women's market.

"We're super excited. At Katusha Sports, we have more women that work here than men, which is rare for a cycling company of any sort. We wanted to bring that parity to the sport. It's hard to develop [product] for women when we don't have a team behind it.

"We have an ongoing commitment to the sport, and we are super excited to change things up a bit and take on some new challenges."