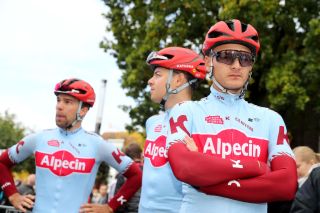 Katusha-Alpecin riders and staff are still waiting for their October wages, Cyclingnews can confirm. The delay is being blamed on cash flow issues. Staff and riders were also forced to wait several weeks for their September wages.

Cyclingnews understands that Katusha-Alpecin wages are typically paid at the very end or start of each month but two weeks have passed since the October due date and riders are still waiting.

According to the team, the UCI are aware of the situation but the governing body did not respond on Wednesday when asked for a comment.

The team’s Russian owner Igor Makarov serves on the UCI’s management board but decided to end his backing of the team this year.

"Everyone has been paid for September but we have a bit of a delay for October," Alexis Schoeb, Katusha-Alpecin’s lawyer, told Cyclingnews.

"It’s a normal delay due to cash availability at the end of the season. I don’t think that there’s any issue at this stage. Riders and staff have been informed of the delay and been told that it’s just a matter of one or two days. So tomorrow or Monday at the latest."

According to Schoeb, the salary delay comes down to a payment from sponsors. He would not confirm when asked if the delay was down to an outstanding payment from one particular sponsor.

“It depends on the payment from the sponsors. Some sponsors have an arrangement where they pay at the end of the month so it puts you in a cash flow situation. Obviously everyone will be paid. This isn’t something that I like or find personally acceptable but everyone is aware of the situation.”

Katusha-Alpecin riders have endured a difficult 2019 season. The future of the team was uncertain from the spring onwards after Alpecin and bike supplier Canyon confirmed that they would not be renewing their sponsorship of the team. After months of uncertainty the team’s WorldTour license was taken over by the Israel Cycling Academy.

Several riders were told that they were surplus to requirements as late as September, and on Thursday a rider currently on the team’s roster confirmed the delay in October’s wages before adding that: "They were also late with September. I can confirm this."

Despite Schoeb’s confidence that the wages will eventually be paid, the team may be forced to turn to their UCI bank guarantee if the sponsor refuses to respect their contract. Although a sponsor debt may create cash flow problems, the team’s paying agent is ultimately responsible for ensuring that wages and bonuses are paid on time.

In 2018 the Aqua Blue team folded in August after the owner of the team decided to leave the sport. The riders and staff were forced to rely on the UCI bank guarantee in order to obtain some of their wages.

At the start of this year Bahrain-Merida riders were forced to wait several weeks for their December wages but the matter was resolved by the end of January.