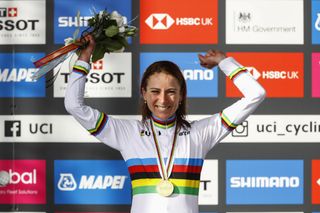 Jumbo-Visma will create a women's team for 2021, with Marianne Vos and Annemiek van Vleuten being targeted as team leader, according to a report by Dutch website Cycling Opinions.

Jumbo-Visma have successfully developed from the ashes of the Rabobank team in recent years and are set to challenge Team Ineos at the Tour de France with Tom Dumoulin, Primož Roglič and Steven Kruijswijk as leaders.

According to Cycling Opinions, the Jumbo supermarket chain has pushed the team to create a women's squad, with support from expected new bike sponsor Cérvelo, who are due to replace Bianchi.

Team manager Richard Plugge has identified Esra Tromp of the Parkhotel Valkenburg to lead the women's project. Plans for the women's team were slowed due to the COVID-19 global pandemic but are now back on track for 2021. Plugge has apparently opted to build a new team structure rather than take over an existing women's team. The new squad is likely to apply for Women's WorldTour status and so compete against the likes of Mitchelton-Scott and Trek-Segafredo.

Both Marianne Vos and Annemiek van Vleuten are out of contract at the end of this year and are seen as ideal team leaders for the rest of the squad. The 33-year-old Vos is one of the most successful and talented riders in women's cycling, while Van Vleuten's aggressive racing style helped her win the world title in 2019. She showed her ability on her return to racing at the Emakumeen Nafarroako Klasikoa in Spain on Thursday, attacking hard on the final climb to win alone.

Jumbo-Visma had initially sought Anna van der Breggen and Chantal van den Broeck-Blaak for the women's team but both opted to stay with Boels-Dolmans after the future of the team was assured by the arrival of the new main sponsor SD Worx. Van der Breggen has announced she will end her career with the team and then become a directeur sportif, with Van den Broeck-Blaak to follow a year later.

Esra Tromp has proven her management ability at Parkhotel Valkenburg, with Lorena Wiebes and Demi Vollering emerging despite the smaller team budget compared to the women's WorldTour teams. According to Cycling Opinions, the Parkhotel Valkenburg team will continue in 2021 but will fill a development role and retain links to Jumbo-Visma.

Martin Vestby, who is currently working for the women's Mitchelton-Scott team, is expected to be lead directeur sportif. The Norwegian has raced in the Netherlands and speaks Dutch.