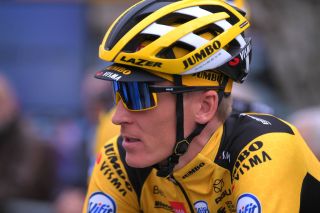 Jumbo-Visma's Robert Gesink at the 2020 Tour de la Provence. The team and clothing supplier Agu have signed a new 'indefinite contract' that will keep the two parties working together for the foreseeable future (Image credit: Getty Images Sport)

Dutch WorldTour team Jumbo-Visma and their clothing supplier, Agu, have announced that they've worked together – along with the Eindhoven University of Technology – to develop a new, faster skinsuit for the team's time-trial specialists to use for the rest of the season. At the same time, the team and its clothing and eyewear supplier also announced their continuing partnership by signing an "indefinite contract".

Agu became the team's clothing supplier at the beginning of 2019, and the two parties have already worked together to develop a 'sprint suit' – a skinsuit for using during road races, sometimes called a 'speedsuit' by other manufacturers – which Mike Teunissen wore to win the opening stage and take the first yellow jersey at last year's Tour de France.

The latest project has seen the development of a time-trial skinsuit in collaboration with the Eindhoven University of Technology (TUE) and their wind tunnel, and all of the team's time-trial specialists will receive tailor-made skinsuits.

"This is a very intensive process, which already results in no less than 3.7% less drag and up to 1.3% time savings compared to the initial situation [previous skinsuit]," said the TUE's Professor Bert Blocken.

"For riders like Tom Dumoulin, every millisecond counts," said Jumbo-Visma team manager Richard Plugge. "Time-saving is extremely important, and can be found in the smallest details. Agu has put its shoulder to the wheel with us and taken us to the next level. In addition, with this partnership, Agu shows that it not only supports the professional team, but also the [under-23] development team and the future plans of the team 100 per cent."

Agu and Jumbo-Visma also signed a new "indefinite contract" in Eindhoven on Monday, with a minimum term that will keep them together until at least the end of 2023.

"Our sponsorship model with main sponsors for an indefinite period of time is unique," said Plugge. "The fact that Agu has joined that model as a clothing and eyewear partner, and that we are going into the future together indefinitely, confirms the trust we have in each other."

Agu CEO Björn Jeurissen added: "Our product development has gained momentum since the start of the collaboration. The feedback we receive from the team, both from the coaching staff and from the riders, is priceless.

"The bicycle market is showing plenty of potential and growth right now. We are very proud that the innovative products we develop with Team Jumbo-Visma are available to everyone in our collection," he said.