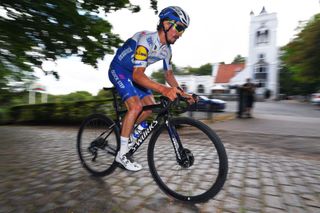 Julian Alaphilippe will resume his season at Strade Bianche on August 1, but the Frenchman will miss Il Lombardia in favour of the Critérium du Dauphiné as he builds towards the rescheduled Tour de France.

The Deceuninck-QuickStep rider will also line out at Milan-San Remo (August 8) and the French National Championships (August 23) ahead of the Grand Départ in Nice on August 29.

Winner of Strade Bianche in 2019, Alaphilippe was initially due to miss the race this season in order to ride Paris-Nice, but the Tuscan event was postponed from its original March date due to the coronavirus pandemic.

"Winning last year was an amazing feeling, one of my best memories of the season," Alaphilippe said in a statement released by his team on Tuesday.

"I came at the start with a great shape, was really focused and had a very strong team always around me until the race came to life inside the final hour. I love the parcours and the atmosphere of Strade Bianche and it will be interesting to restart the season there, especially as it comes after a different preparation than I had last year."

A week after Strade Bianche, Alaphilippe will seek to defend another title at Milan-San Remo, which he won during his remarkable 2019 campaign. He described his triumph at La Classicissima as "the biggest victory of [his] career".

Alaphilippe placed second at Il Lombardia in 2017 and has made no desire of his secret to add the Monument to his palmarès but he confirmed that he will forgo this year’s race, which has been fixed for August 15. He will instead fine-tune his climbing ahead of the Tour de France by riding the shortened Critérium du Dauphiné (August 12-16). His final race before the Tour will be the French Championships in Grand-Champ.

"The Dauphiné is the best preparation for the Tour de France. It will be a special edition with many hard stages, but that doesn’t scare me and I would love to win again a stage, like last year," Alaphilippe said. "As for the National Championships, I think it’s every rider’s dream to win the tricolour. I will give it my all, even though the parcours doesn’t really suit me like the old one in Plumelec."

Alaphilippe placed 5th overall in the 2019 Tour, wearing the yellow jersey for 14 days and winning two stages, including the individual time trial in Pau. The Frenchman was in contention for final overall victory until the final days of the race, only losing the maillot jaune on the Col de l'Iseran on stage 19.

The route of the 2020 Tour looks well suited to Alaphilippe’s characteristics as a puncheur, with a host of medium mountain stages in the opening two weeks of the race. The 28-year-old is currently at a training camp in the Dolomites with his Deceuninck-QuickStep team.

"I will take it one step at a time," he said. "At the moment, the preparation is going well, I’m happy to be here in Val di Fassa with the guys, I talked with the team about my goals and I’m really eager to restart the season to see how I feel and what I can do."

Alaphilippe began his 2020 season at the Vuelta a San Juan in Argentina, but he abandoned the race due to illness after two stages. He remained in South America to ride the Tour Colombia 2.1 before racing the Faun-Ardèche Classic and Drome Classic in France.

His last race before the coronavirus pandemic interrupted the cycling season came at Paris-Nice, where he placed 16th overall after aggressive cameos on the first and penultimate stages.