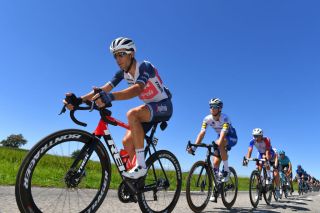 Italian national coach Davide Cassani has named a 13-rider squadra for the elite men's road race at the World Championships in late September, opting for an eclectic group built around team leader Vincenzo Nibali (Trek-Segafredo) in case the Sicilian fails to find his form for Italy's home championships.

Filippo Ganna and Eduardo Affini will ride the time trial.

Bettiol, Caruso and Colbrelli will  be on form after riding the Tour de France, but both could struggle on the very demanding Imola circuit. Bagioli beat Primoz Roglic to win a stage at the Tour de l'Ain but is only 21. Ulissi won stage 1 at the Tour de Luxembourg and is perhaps the best alternative leader to Nibali.

Davide Formolo, who underwent surgery a few days ago after crashing out of stage 10 of the Tour de France, has already started to ride on a home trainer and is keen to play a role in the Italian squad.

Cassani will reduce the 13-rider squad to 11 on Saturday after the Giro dell'Appennino, with eight riders and two reserves selected to travel to Imola.

The elite men's World Championships road race will take place on Sunday, September 27, while the elite women's race takes place the day before.

The 2020 Worlds were originally due to take place in Aigle and Martigny, but the event was cancelled owing to the restrictions on public gatherings in Switzerland due to the coronavirus pandemic, and Imola stepped in, taking advantage of the finish area infrastructure offered by a closed motor-racing circuit.

Italy won the elite men’s world title in Imola back in 1968 when Vittorio Adorni soloed away to victory. Cassani watched the race from the roadside as a 10-year-old boy.

"The 1968 race sparks special memories for me. My dad took me to see the race, and the emotions of it made me decide I wanted to be a cyclist. That was the start of this wonderful adventure," Cassani said.

"Our team will be a mix of talented young riders, like Fabbro and Bagioli, and other more experienced riders. I wanted to give Formolo a chance because he's never given up hope and is back training indoors. We've suffered a series of injuries, but we've never lost faith in our chances. We hope to do well."

Unfortunately for Italy and for Cassani, Nibali is not so sure of his form and therefore of his chances of success in Imola. The steep but short climbs on the circuit appear to suit a more aggressive rider like Wout van Aert of Belgium or Julian Alaphilippe of France.

"If I feel good, the course could suit me, but it all depends on how I feel," Nibali told La Gazzetta dello Sport after riding a lap of the course on Tuesday.

"My form will be decisive. If I feel good on the ninth lap, then perhaps I could make a difference. I tried to find some answers to questions about my form at Tirreno-Adriatico, but I didn't find them. I've still got some doubts in my mind. If you ask me if I'm ready for the Worlds, well, I don't know myself, and I've told Casssani that."