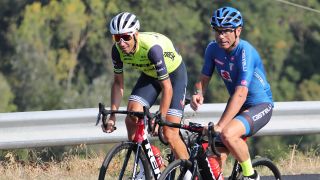 Trek-Segafredo's Vincenzo Nibali was in Imola, Italy, for a reconnaissance ride of the 2020 UCI Road World Championships road race course on Tuesday, alongside Italian national team selector Davide Cassani. Nibali concluded that the two short climbs on each lap of the 28.8km circuit are "very tough", while Cassani said that he believed that it would suit both climbers and the hilly Classics specialists.

While a number of top-name riders are currently taking part in the Tour de France, Nibali is instead targeting this year's rescheduled Giro d'Italia (October 3-25), and so was available for the recon ride with Cassani, who also rode his bike. The pair's trip to see the circuit suggests that it will be Nibali who will lead the Italian selection for this year's Worlds road race.

"The course is difficult and selective, with two very tough, short climbs," said Nibali in a press release from the organisers of the Worlds.

"The second one towards the end [the Cima Gallisterna] is really hard, followed by the long descent that leads back to the racetrack," the 35-year-old continued. "To be in the lead, you're going to have to be very alert and in good shape, in addition to being able to count on some good team work."

Nibali tempted to race on into 2022 after COVID-19 break

Nibali also added his congratulations to the organising committee, which only had a short period of time to organise the championships after the announcement in mid-August that the towns of Aigle and Martigny, in Switzerland, would be unable to host this year's Worlds as planned due to Swiss government limits on public gatherings during the ongoing coronavirus crisis. Imola was subsequently unveiled by the UCI as the replacement venue at the start of September.

"I've seen that they've repaved almost 90 per cent of the race course, so we're going to have it in top condition," Nibali added. "It's going to be a wonderful challenge – a show that cannot be missed by the fans that I'm inviting to come to Imola to root for Italy."

Italian national team selector Cassani demonstrated a slightly more measured approach, 'warning' that, despite being on home turf, his team will be up against it from the likes of the French, Danish and Belgian national squads, as well as from three-time road race world champion Peter Sagan of Slovakia.

"I know this area very well. These are my roads," said Cassani. "In my opinion, it's a course not only for climbers but also for Classics specialists, like those capable of winning the great Classics such as Liège-Bastogne-Liège.

"I'm thinking of Julian Alaphilippe [France], Wout van Aert [Belgium] and Jakob Fuglsang [Denmark], but watch out, too, for Peter Sagan, because if he comes out of the Tour de France well, he'll be able to have his say, too, as the climbs are not so long. There's a wide range of potential winners," he said.

Nibali and his rivals will, however, likely have breathed a sigh of relief that one potential favourite has decided not to take part in this year's Worlds. The Netherlands' Mathieu van der Poel told La Gazzetta dello Sport earlier this week that he won't participate, and will instead concentrate on being ready for the rescheduled Tour of Flanders and Paris Roubaix in late October.

The elite men's World Championships road race will take place on Sunday, September 27, while the elite women's race takes place the day before. Both start and finish at the Enzo e Dino Ferrari motor-racing circuit in Imola, and leave the circuit for multiple laps of a 28.8km circuit, which uses the climbs of the Mazzolano (2.8km at an average gradient of 5.9 per cent) and the Cima Gallisterna (2.7km at 6.4 per cent, with sections that reach 14 per cent). The men's race covers nine laps, while the women's race covers five laps.