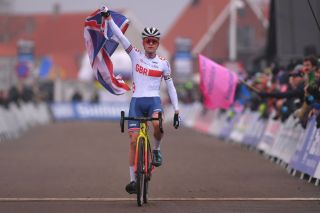 Recent Under-23 Giro d’Italia winner Tom Pidcock, James Knox and Hugh Carthy are expected to lead the Great Britain men's team for the World Championships road race in Imola, Italy, while both Adam and Simon Yates have opted not to race and Geraint Thomas will only ride the time trial.

21-year-old Pidcock is allowed to step up to ride the Elite race in the absence of the U23 events. He is the current U23 cyclo-cross world champion and won three stages and dominated the overall classification of the U23 Giro d’Italia and seems perfectly suited to the hilly Imola course.

Pidcock was aggressive in the recent elite men’s European Championships and does not seem concerned about taking on the likes of Wout van Aert, Julian Alaphilippe, Alejandro Valverde and Vincenzo Nibali.

Thomas finished second overall at Tirreno-Adriatico but has opted to only ride the time trial as he prepares to lead Ineos Grenadiers at the Giro d’Italia, which begins in Palermo just six days after the World Championships road race.

Adam Yates is currently fighting for a top-10 spot at the Tour de France, while his twin brother Simon is also targeting the Giro d’Italia after winning Tirreno-Adriatico.

"The way the race calendar is this year means we are missing some of our Grand Tour specialists in the road race as they prepare for the forthcoming Giro d’Italia and Vuelta a España, but regardless of that I believe we have a strong men’s team for both the road race and the time trial events and I know we will make the fans proud," Great Britain performance director Stephen Park said.

"Geraint is in good form, as proven by his second place finish on the General Classification at the Tirreno Adriatico, and we have been working closely with Alex and his coaches over recent months to support his time trial ambitions, so I’m confident we will see some good results in that event.

"As we always do, we’ve seen Luke play a solid role as team captain during the Tour de France this year, and it’s been brilliant to see Hugh Carthy up there for his team on the mountain stages. I’m also pleased to see Tom Pidcock selected for the elite men’s race, having won this year’s Giro d’Italia Under 23. He’s a great talent, and a highlight this year was watching him finish in second place in the elite cyclo-cross world championships, so I’m looking forward to seeing him take on the elite men’s field out on the road."

The elite men's World Championships road race will take place on Sunday, September 27, while the elite women's race takes place the day before. Both start and finish at the Enzo e Dino Ferrari motor-racing circuit in Imola, and leave the circuit for multiple laps of a 28.8km circuit, which uses the climbs of the Mazzolano (2.8km at an average gradient of 5.9 per cent) and the Cima Gallisterna (2.7km at 6.4 per cent, with sections that reach 14 per cent). The men's race covers nine laps, while the women's race covers five laps.

The 2020 Worlds were originally due to take place in Aigle and Martigny, but the event was moved owing to the restrictions on public gatherings in Switzerland due to the coronavirus pandemic.

Earlier this month, it was confirmed that the Italian city of Imola had beaten La Planche des Belles Filles in France to the right to host a scaled-back version of the Worlds in late September. The racing programme will be limited to four days and four events: the elite men’s and women’s individual time trials and road races. There will be no junior and U23 World Championships in 2020.

Cyclingnews will have full coverage from the UCI World Road Race Championships.