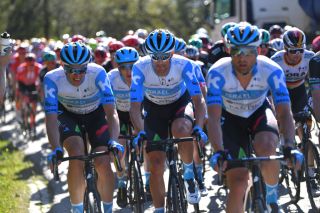 Due to the current risk of coronavirus infection, riders at WorldTour team Israel Start-Up Nation are being permitted to choose whether they want to race at the upcoming Italian spring races Strade Bianche, Tirreno-Adriatico and Milan-San Remo, and French stage race Paris-Nice.

Both riders and staff will be allowed to stay at home if they don't wish to travel, according to a Het Nieuwsblad report on Tuesday.

The team is one of a number that haven't yet released their complete rosters for this Saturday's Strade Bianche or Paris-Nice, which starts on Sunday, and, according to sports director Dirk Demol, the 'cut-off' for Israel Start-Up Nation's riders' decisions is Wednesday evening.

On Tuesday, the team's Hugo Hofstetter won Le Samyn, and the Frenchman is next set to race at Paris-Nice, which starts in Plaisir, just west of Paris, this weekend.

Bert Van Lerberghe has broken his collarbone after crashing at Tuesday's Le Samyn in Belgium. The Deceuninck-QuickStep rider came down with around 90 kilometres left to race, and will now be operated on in hospital in Roeselare, Belgium, on Wednesday.

"We were putting pressure on the peloton, and there was a small echelon, and Van Lerberghe was in the line on the side of the road when another guy went off and took Bert with him," explained sports director Rik Van Slycke on the team's website.

"He crashed into a ditch and picked up this injury, which is a real pity, as he was in a very good condition for this start of the season, and was one of the riders we could have used in the Classics."

Evenepoel training for Tirreno-Adriatico in Spain to escape rain

Deceuninck-QuickStep's Remco Evenepoel is currently doing some warm-weather cycling in Calpe, Spain, in order to avoid the wet weather back home in Belgium, according to Het Nieuwsblad.

Evenepoel will ride Italian stage race Tirreno-Adriatico, which starts on Wednesday, March 11, in Lido di Camaiore, in Tuscany, but will apparently first this weekend do a reconnaissance of the route of stage 14 of this year's Giro d'Italia – a 33.7km individual time trial in the Veneto region, between Conegliano and Valdobbiadene.