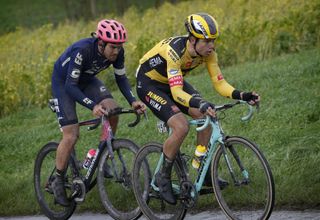 Jumbo-Visma's Wout van Aert has told the Dutch media that his goal in the "coming years" is to win one of the Monuments – cycling's five biggest one-day races – and it would appear that the Tour of Flanders and Paris-Roubaix, both of which he's set to ride later this season, are top of the list.

Speaking on Dutch newspaper the Algemeen Dagblad's podcast In Het Wiel, the Belgian said that while it's still uncertain whether the rescheduled races on the UCI's new 2020 calendar will be able to take place while the coronavirus pandemic continues in Europe, he hopes to restart his season at Strade Bianche on August 1, followed by Milan-San Remo (August 8) and the Tour de France (August 29-September 20).

Van Aert: Olympics postponement increases my chances of being selected

After the Tour, Van Aert would then take on the 'spring' Classics, with the likes of Gent-Wevelgem, the Tour of Flanders and Paris-Roubaix having been moved to new autumn slots for this year, on October 11, 18 and 25, respectively.

"A few years ago, I set the goal for myself to see how far I can get in those Classics, and I believe now that I can win a Monument," Van Aert said, according to HLN.be.

"That's the goal for the coming years, and so it would be very stupid to miss an opportunity just because the calendar's a bit different this year. It's not that easy to win the Tour of Flanders or Paris-Roubaix, so you should take every chance [to race them].

"And I'm sure that I'll be able to ride some nice cyclo-crosses afterwards," said the three-time cyclo-cross world champion. "But up to and including Roubaix, the focus will definitely be on the road."

The 25-year-old also recalled the day when, six months after crashing out of his debut Tour de France during the stage 13 time trial in Pau last year, he went to ride a time trial bike for the first time again.

"When I saw the bike, the saddle was tilted," he recalled. "At that point, fear washed over me because I thought it was the same bike that I had crashed on.

"But it turned out not to be the case. The team staff soon told me that it was just a technical problem, and that all the bikes' saddles were tilted," Van Aert said. "It seems silly, but that's how I was feeling."