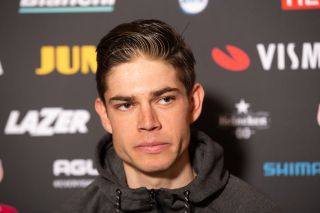 Wout van Aert hits the road Saturday for the first time since his devastating crash at last year's Tour de France, lining up for Omloop Het Nieuswblad to begin his 2020 season.

The Jumbo-Visma leader, who heads to the race for the second time in his career, said that he feels good after an extended altitude camp in Tenerife ahead of his season opener.

Speaking at the Dutch team's pre-Opening Weekend press conference in Gent, Van Aert said he had "no doubts" about his current condition but added that he won't be able to give an exact answer about his form until Saturday evening.

"I think it's pretty good," Van Aert said, as reported by Het Nieuwsblad. "During altitude training in Tenerife I trained daily with Mike Teunissen and Amund Grøndahl Jansen, and I felt that all three of us reached a good level.

"I'm much further ahead than we hoped," he said. "In Tenerife I've gotten a lot better. I didn't do a specific test there like I did in the winter, but my wattages are good. We were able to do everything as planned."

10 riders to watch at the Opening Weekend

Teams brave the elements to prepare for Opening Weekend – Gallery

Despite not having raced on the road yet this season, Van Aert will take the start line in Gent as one of the major favourites for race victory in Omloop. The competition is strong – even if his cyclo-cross rival Mathieu van der Poel withdrawing due to flu – with names like Greg Van Avermaet, world champion Mads Pedersen and Philippe Gilbert among the starters.

Van Aert said that, despite question marks over his race condition, he would never turn up at a race just to be there. But regardless, there's no specific goal he's aiming for at Omloop.

"I'm never going to start a race to make up the numbers and I don't plan to do that at Omloop Het Nieuwsblad either," he said. "The plan? It may sound silly, but I have no specific goal for Saturday.

"I can't answer that," he said when asked if he was apprehensive about his race return. "If things don't run the way I want to, I'm not going to use it as an excuse."

Unlike a number of his rivals – CCC, Team Ineos, EF Pro Cycling and UAE team Emirates were among teams to recon the course during the week ­– Van Aert didn't head out onto the cobbles over the past few days. The 25-year-old will take the start without a recon in his legs, but he said it wasn't a problem for him.

"I didn't have my things with me to ride the course ahead of time; I had to go home last night to pack my suitcase. That made it too tight to get back to Gent by Friday morning for a recon. I'll have to make do with teammate's tips.

"Anyway, Omloop is a race where the final comes up very quickly. After 40km, we'll be heading for the first cobblestones. Normally it would still be quiet then, but with the weather forecast we'll have to be careful to avoid surprises all day."

Van Aert also passed comment on the coronavirus crisis, which has seen teams cloistered in Abu Dhabi hotels after two Italian staff members reportedly fell ill, causing the cancellation of the UAE Tour. The upcoming European season could be affected, should the virus spread, and Van Aert noted that alternate racing plans were in place should his own calendar be affected.

"When I read the news about the UAE Tour, it becomes more and more real," he said. "Everyone who has races on his program will have to make an alternative plan. So, will we, but it's impossible to anticipate it now."