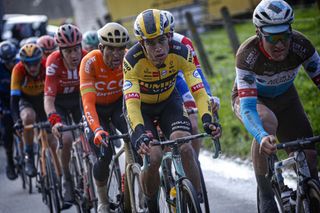 Jumbo-Visma sports director Merijn Zeeman has given the Belgian press a glimpse of which races the team's riders may take part in when the revised UCI calendar hopefully begins again with Strade Bianche on August 1. According to Het Nieuwsblad, serious training will begin again for the team from June 1.

As previously reported, Zeeman said that the plan remains for Tom Dumoulin, Steven Kruijswijk and Primoz Roglic to spearhead Jumbo-Visma's Tour de France challenge, and suggested that Belgians Wout van Aert and Laurens De Plus would also be part of the squad for La Grande Boucle, which has been rescheduled to take place from August 29-September 20.

Van Aert has raced just once on the road this season as a result of professional cycling's shutdown due to the coronavirus pandemic – at the Omloop Het Nieuwsblad in February, at which he finished 11th – although the 25-year-old also raced the second half of the cyclo-cross season after returning from the serious hip injury he suffered after crashing during the stage 13 individual time trial at last year's Tour de France.

Roglic: We should assume the best about the new calendar

Last summer's Tour was Van Aert's Grand Tour debut, during which he won stage 10 from Saint-Flour to Albi from a reduced-bunch sprint, and was also part of the squad that won the team time trial on stage 2.

Zeeman and Jumbo-Visma would like to be able to send their star riders such as Van Aert, Dumoulin, Kruijswijk and Roglic on some high-altitude training camps before races like the Tour, but they realise that the opportunity to do so will be limited.

"Because there'll be less racing this season compared to other years, we'll give priority to competition," Zeeman told Het Nieuwsblad on Friday.

A rider like Van Aert, therefore, he said, is likely to ride both Strade Bianche on August 1 and Milan-San Remo on August 8, which could leave little room for training camps. After the Tour, Van Aert is also likely to target the 'spring' Classics – which will this year take place in the autumn.

"He needs to get enough rest," Zeeman nevertheless warned, with the hope being that Van Aert will be able to finish his first Grand Tour this year, "especially in view of the cyclo-cross season immediately following the Classics."

Het Nieuwsblad also reported that Dumoulin is likely to target Amstel Gold (October 10) as well as the Tour, while Kruijswijk was likely to ride the Tour and the Vuelta a España (October 20-November 8), and Roglic could take on the Ardennes Classics after the Tour.

"Primoz wanted to race Flèche Wallonne [September 30] and Liège-Bastogne-Liège [October 4] this year, and that plan is still on the table," said Zeeman.

New Zealand's George Bennett, meanwhile, will apparently be the squad's GC rider at the Giro d'Italia (October 3-October 25), where Dylan Groenewegen will be targeting the sprint stages.

"June 1 is the real start to the rest of the season for us," Zeeman said. "That's when we'll start training again, and playtime will be over."