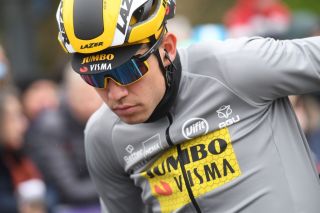 Jumbo-Visma's Wout van Aert believes that the postponement of the 2020 Tokyo Olympic Games, announced this week, might count in his favour when it comes to possible selection for Belgium's second and final place for the time trial.

"For me, personally, it increases my chances of being selected, because it gives me more opportunities to show myself," Van Aert said on his team's website on Tuesday, with the 2020 Games now likely to happen in the spring or summer of 2021 rather than their original July 24-August 9 dates.

Belgium has two spots for the time trial, and the possibility of filling the second spot from a whole host of suitors. That first berth has already been taken by Deceuninck-QuickStep's Remco Evenepoel, by virtue of him becoming the European time trial champion in 2019. In the hunt for the second place are Van Aert, his Jumbo-Visma teammate Laurens De Plus, Hour Record holder Victor Campenaerts (NTT Pro Cycling), Yves Lampaert (Deceuninck-QuickStep) and Lotto Soudal's Thomas De Gendt.

Both selected time triallists also have to form part of the five-rider squad that takes part in the road race, meaning that selectors may not necessarily plump for the fastest man for the second spot but rather a rider who's more likely to be able to serve the team in the road race.

"I think it's a good decision," Van Aert said of the International Olympic Committee (IOC) and Japanese government's decision to postpone the Games, which are to be held, according to the announcement, by summer 2021.

"I think it's good for everyone that it was decided early," continued Van Aert. "Society's call for a decision has become louder and louder in recent days. In this way, everyone gets the chance to prepare themselves well. That would certainly not have been the case this year."

Van Aert crashed during the stage 13 individual time trial at his debut Tour de France last July, severely injuring his hip, and had only returned to competition at the end of December at the Azencross cyclo-cross race in Loenhout, Belgium, where he finished fourth.

He then won the Krawartencross near Antwerp, in early February, and returned to the road at Belgian one-day Classic the Omloop Het Nieuswblad at the end of the month, taking 11th place.

After just one race, however, Van Aert's season and those of most of the world's top sportsmen and women, was cut short by the coronavirus crisis, and the shutdown is likely to last until at least the end of April in cycling's case, according to governing body the UCI.

"Now that this wise decision [to postpone the Games] has been made, the different sports also get the chance to amend their calendars," added Van Aert.

"In cycling, that provides the space to reschedule races or, I don't know, to possibly reschedule the Tour de France.

"And, for next year, the calendar can already take the Olympic Games into account. The fact that we already know this is positive. So I'm not too disappointed, and hopefully there'll be other goals for this year," he concluded.