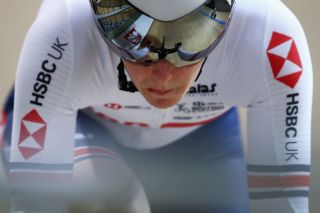 British Cycling announced Tuesday that HSBC UK will bring a premature end to its sponsorship with the federation following this Olympic and Paralympic cycle. According to a press statement, the bank has decided to exercise a break clause in what was an eight-year partnership agreement due to a 'shift in UK marketing and partnership priorities'.

"On course to get over two million people cycling regularly, British Cycling’s partnership with HSBC UK has delivered lasting benefits for our sport and for communities up and down the country," said Julie Harrington, chief executive of British Cycling.

"We will part with HSBC UK as firm friends and, in the meantime, look forward to working with them to support our riders to achieve their best in Tokyo."

HSBC announced last week it would cut 35,000 jobs after reporting a 33 per cent drop in profits.

HSBC UK entered into a partnership with British Cycling in 2016 as part of an eight-year agreement. The targets included getting two million people cycling by the end of 2020, a number British Cycling said it is on course to exceed.

"We are extremely proud of what our partnership has delivered over the last three years and excited about what it can achieve this year. When we set off on this journey together we wanted to get two million people cycling regularly and we’re on track to smash through that this year," Ian Stuart, chief executive of HSBC UK, said in a press release.

"We wanted this partnership to create a legacy and it has. It has changed the way we approach things as a company as we encourage our customers and our colleagues to make healthier and greener choices.

"2020 will be an exciting year for the sport, with Britain willing on our athletes to medals in Tokyo. It’s been a privilege to be involved in building the grassroots of a sport with such a fantastic future."

British Cycling has been one of the most competitive and successful cycling nations in the last 20 years with riders that include former road race world champions Mark Cavendish and Lizzie Deignan, Olympic gold medallists Laura Kenny and Jason Kenny, and former Tour de France winners Bradley Wiggins, Chris Froome and Geraint Thomas.

More recently, however, British Cycling has been involved in two highly-publicized and on-going cases at the employment tribunal and the General Medical Council (GMC).

Jess Varnish, who was dropped from the high-performance programme before the 2016 Olympic Games in Rio, has been fighting to be declared an employee of British Cycling or UK Sport, which would open doors for her to sue the federation for unfair dismissal.

She also accused then-technical director Shane Sutton of sexism and discrimination, leading to first an internal investigation then an independent inquiry into the federation's culture. Sutton resigned from his position at the federation, but was later cleared of eight of nine allegations.

Varnish will head back to court in May after the Employment Appeals Tribunal ruled that she has a full right to appeal the body's decision against her.

In addition, there have been repeated delays in the tribunal hearings to decide whether former British Cycling and Team Sky doctor Richard Freeman is fit to practice medicine. Freeman accepted 18 of the 22 allegations, including the ordering of Testogel in 2011, but disputed those surrounding the delivery of testosterone to Team Sky and British Cycling HQ that same year.

British Cycling did not mention either case as a reason for the sponsorship loss, but made it clear that HSBC UK decided to exercise a break clause because of "a shift in UK marketing and partnership priorities" and that it parts with HSBC UK as 'firm friends'.

Harrington said that British Cycling will begin a search for new partnerships to replace HSBC UK funding beginning in 2021.

"Over the last 20 years, British Cycling has enjoyed extraordinary success - both in terms of winning on the global stage and in using that inspiration to encourage more people to cycle more often," she said.

"We are an ambitious organisation with a proud tradition of setting and hitting big targets and we know that more people on bikes is the solution to many of society’s biggest challenges. As we look to 2021, we will be actively engaging the market to find a new partner to be part of the next stage of our exciting journey."