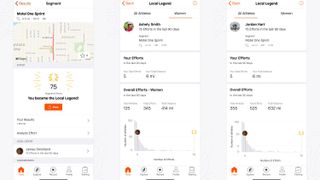 Strava's Local Legends dashboard is now open for all to use (Image credit: Strava)

Strava’s new Local Legends feature has added a revolutionary way that users can interact with the activity app and it is now available to more riders.

Whereas sheer fitness or risk indifference was the way to become a climbing or descending KOM, the Local Legends hierarchy rewards participation and consistency.

The feature, which awards the Local Legends laurel to the athlete who has completed each segment the most times within a 90 day period, has slickly been integrated into Strava’s overall user interface, offering intuitive navigation. It should also be noted that only activities that are ‘visible’ to everyone, will count towards Local Legend efforts.

To give users an idea of the consistency they would require, to become a competitive Local Legends candidate, Strava has released some interesting data across its UK segments for the last 90 days.

By far the most popular Strava segment is ‘Kingston to Bushy’, with 80,201 rides logged. The most by a single cyclist: 97.

The second most logged UK segment, also in the London area, is ‘Heaven is a place on earth’, totalling 55,717 rides, with a single rider peak effort of 83.

Possibly one of the most prized segments in all of Strava’s UK riding universe, is the renowned ‘Box Hill’ climb, in Surrey. Over the last three months, it was ridden a little over 37,000 times. If you desire to become the ‘Box Hill’ rider with Local Legend status, it will require more than 80 efforts within in a 90-day window.

In the South West, Bristol's 'Over Bridge to Aston[sic] Court' is ridden most, which has been ridden 28,368 times - 86 times by a single rider. Wales sees a close battle between Cardiff and Swansea, with the latter city's County Hall to Cenataph[sic] being ridden the most, 11,843 times to be precise, and 67 times by a single cyclist.

In the North, Yorkshire's Askwith Ln to Denton Rd is the busiest segment, with 13,833 efforts, 44 of which were by a single rider. Further North, Edinburgh's roundabout to roundabout takes the crown for Scotland, with 29,925 participations. An enormous amount of efforts will be required to take the laurel, as a single rider has amassed 197 efforts. Northern Ireland's most-ridden segment is Comber back to Belfast - a segment that has seen traffic to the tune of 6,800 rides, 53 of which by the same person.

For riders who are exceptionally disciplined with their training and cycling routine, the Local Legends feature allows an opportunity to achieve Strava status, without brutalizing the body by potentially overexerting yourself.

After Strava initially released the Local Legends update in the US, it has now been made live in France, Germany, Spain, Japan, Brazil and the UK.