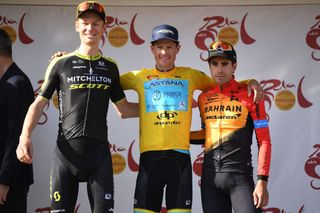 Australian climber Jack Haig has continued his strong start to the season for Mitchelton-Scott by taking second place overall to Astana's Jakob Fuglsang at the Vuelta a Andalucia. Haig went into Sunday's final-stage individual time trial in third place, but managed to leapfrog Bahrain McLaren's Mikel Landa and secure his second runner's-up spot this year.

Haig was Michelton's designated leader for the Spanish stage race, which is also known as the Ruta del Sol, following his second place overall behind Tadej Pogačar (UAE Team Emirates) at the Volta a la Comunitat Valenciana two weeks ago.

He finished seventh on the final stage on Sunday, 24 seconds down on stage winner Dylan Teuns (Bahrain McLaren) and second-placed Fuglsang, but 34 seconds ahead of Landa, meaning that Fuglsang won the overall title by 59 seconds from Haig, with Landa third, another 13 seconds down.

"It's a great feeling to move up to second overall, especially after going into the TT in third place, and not really expecting to move up. It's a great start to the season," Haig said on his team's website.

"If you would have told me I would come away with second place before the race, then I would have been incredibly happy," he added. "Even with the little mishap the other day in the final, it has still been an incredible week and the guys have done an amazing job helping me every day."

Haig looked to be in the perfect position to potentially take the victory on stage 3 on Friday, sitting on Teuns' wheel as the pair led a group that included Fuglsang and Landa into the final, sharp right-hand turn to the finish in Ubeda. However, Teuns made the mistake of not seeing the bend, possibly because of the shadow on what was a cobbled road, and Haig was so close behind that he simply followed the Belgian's wheel.

The Australian was forced to stop and unclip his foot to get back on track, by which time Fuglsang, and others, came past, and Haig had to settle for seventh on the stage, which left him in sixth overall, 35 seconds down on leader Fuglsang.

However, Haig bounced back on stage 4 to Grenada the next day, winning the stage ahead of Fuglsang and Landa to put himself into third place overall – still 35 seconds down on Fuglsang and 21 behind Landa going into the final time trial.

"We've taken one stage win and a podium overall, and if you see how the team was riding together every day, and the goals we had before the race, then we did everything this week," said sports director Laurenzo Lapage.

"The riders have all come out of this race in a good condition, and are ready for the next big goals. Everybody is healthy, and you can see they have worked well in the winter, and they have made another step forward here," he said.