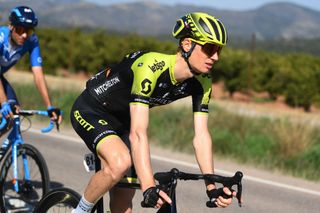 Jack Haig will continue as Mitchelton-Scott's designated leader for the Vuelta a Andalucia 'Ruta del Sol' stage race, which runs from February 19-23, on the back of his second place overall to UAE Team Emirates' Tadej Pogačar at the Volta a la Comunitat Valenciana earlier this month.

"I am obviously coming into the Ruta del Sol with quite a lot of confidence after how I raced in Valencia, and it's nice to start the season off well and to have some momentum behind you going into these few races in Spain," said Haig in a team press release.

"The course is quite a bit harder than Valencia; every single day is quite tricky. Even the first day has a downhill finish, but you have to get over quite a big mountain before the final downhill, so there are many options for it to be much more selective than in Valencia," he said.

"The time trial on the final day looks very technical on the map, so I'm curious to see it in person. It looks interesting, as it's definitely not a straightforward TT."

Zeits signs for Mitchelton-Scott after twelve years with Astana

Landa to start season at Vuelta a Andalucia: If I have the opportunity to win, I will certainly not back down

The 26-year-old Australian will be supported in the mountains by veteran climber Mikel Nieve, while it will be hoped that equally experienced new signing Andrey Zeits can quickly find his feet, taking part in his first race with the team on the back of 12 seasons with Astana.

It is a wholly different squad to the one that supported Haig at the Volta a la Comunitat Valenciana, and is completed by another hugely experienced rider in Brent Bookwalter, former Australian road race champion Alex Edmondson, Alexander Konychev and Edoardo Affini.

"The number one goal is to have a good performance both personally and with the team," continued Haig. "The team performed incredibly well in Valencia so if we keep working this way then it would be great.

"For me, a top-five finish would be a really, really good result going into the next stage races in March, but I definitely would be happy with a top 10, and finishing safely, getting another race under the belt for the start of the season," he said.

Sports director Laurenzo Lapage added: "If you see the course for the Ruta del Sol and what Haig showed in Valencia, then, for the overall, it is all around him. As soon as the first stage, it's hard, and there are a lot of hilly stages with uphill finishes, so he will be our protected guy.

"It's a good race to work together on. We have some new guys in the team, like Zeits, so it's a good opportunity to show him how we work in the team, and good preparation for the races to come.

"We'll have to see what the situation is after the first stage, but there'll probably be some early time gaps, and we'll be able to see some good indications as to the final general classification after the hard final climb [on stage 1]. We also have some strong guys like Edmondson for if there's a sprint finish, possibly on the second stage," he said.