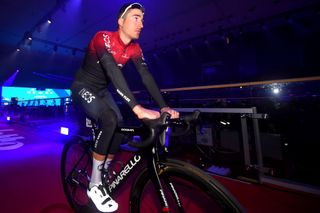 Gianni Moscon has been disqualified from Kuurne-Brussel-Kuurne in the middle of the race for apparently throwing a bike at another rider.

The Team Ineos rider was caught up in a crash with around 65km remaining and fell into a ditch along with a number of other riders.

Venting his frustration, he then picked up a bike and threw it at a B&B Hotels-Vital Concept rider.

When he received notice of his disqualification, Moscon took out the first of his two race numbers, scrunched it up, and threw it to the floor.

He then reached for the second, sat up, and ripped it in two before discarding it.

It's not the first time Moscon has found himself in trouble with the authorities. He was disqualified from the 2018 Tour de France after punching the French rider Elie Gesbert. At the 2017 World Championships, he was disqualified for holding onto his team car.

In 2017, he was suspended by his own team after racially abusing Kevin Reza at the Tour de Romandie. Later that year, he was accused of causing Sebastien Reichenbach - a teammate of Reza at the time - to crash and break his elbow and hip, although he was later cleared due to a lack of evidence.

In late 2018, Moscon jokingly referred to his previous disciplinary issues.

"I’ll glue my hands to the bars and wont take a bidon," he said.

"I don’t want to give anyone something to get hold of. I know I can’t be liked everyone. There’s a lot of envious people out there. But the people who know me support me. That’s all I need."