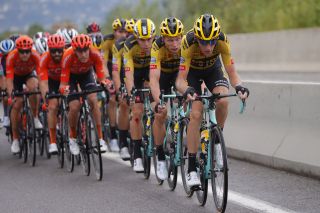 Jumbo-Visma's Robert Gesink has hit out at the UCI for not intervening during the wet and dangerous opening stage of the Tour de France in Nice on Saturday, with a large number of riders crashing, and Bahrain McLaren's Rafael Valls being left with a broken femur and Lotto Soudal's John Degenkolb also out of the race after finishing outside the time limit following a crash.

"Apparently it wasn't dangerous and spectacular enough for the UCI. In my opinion, the last crash is their responsibility," Gesink told Dutch broadcaster NOS, according to cycling website Wielerflits on Saturday evening.

A request from the riders for the UCI commissaires to intervene was apparently refused, and instead Gesink's Jumbo-Visma teammate Tony Martin coordinated a rider-led neutralisation of the stage, with the agreement of the other teams, from the top of the second descent of the Côte de Rimiez until 25km to go, when racing resumed and Alexander Kristoff (UAE Team Emirates) won the stage to take the Tour's first yellow jersey.

"It was really ridiculous," continued Gesink of the treacherous conditions. "And then the UCI just let it go. We've seen enough dangerous moments in the past weeks. This was an opportunity for the UCI to do something right by us. We can make it as difficult as we want for another 20 days, but they still won't do anything.

Valls out of Tour de France with fractured femur

"All the other riders in the peloton thought it was good in the end. They thought it was too dangerous," the 34-year-old Dutch rider added of the decision to back off on the descents on the wet roads until they were back on flatter roads, although there was still another crash on the approach to the stage finish on the Promenade des Anglais, where Valls and French favourite Thibaut Pinot (Groupama-FDJ) crashed.

"It would have been a shame if everyone was already riding in bandages after one day," said Gesink, adding that it was vital that the final descent was taken at a slower speed. "There was oil everywhere, and it was really slippery. If we hadn't neutralised everything there, 20 riders would have flown over the wall, so I'd like to give the riders a pat on the back."

According to Wielerflits, Jumbo-Visma teammate Martin told Sporza: "It had become unpredictably slippery and was no longer safe. That's why I was the one who gave the signal.

"But the initiative to keep it safe came from several teams. Only Astana didn't listen at first, but you saw what happened to them," said the German.