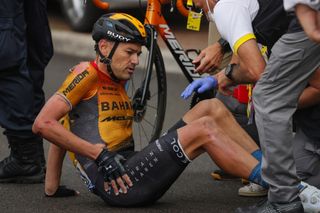 Bahrain McLaren's Rafael Valls is out of the Tour de France following a crash on the Promenade des Anglais in Nice, just three kilometres from the finish of the opening stage on Saturday, which left him with a broken femur.

The 33-year-old Spanish rider was the first of two riders to already be out of this year's Tour. Lotto Soudal's John Degenkolb trailed home outside the time limit and won't be permitted to start stage 2 in Nice on Sunday.

A large number of riders limped home with injuries sustained during the rainy first stage on a 156km course around Nice, with most falling on the wet descents – such as Ineos Grenadiers' Pavel Sivakov – or in the same crash that Valls was involved in, close to the finish, with one of the pre-race favourites, Thibaut Pinot (Groupama-FDJ) also falling.

"Unfortunately, Rafa Valls has withdrawn from the Tour de France after fracturing his right femur in a crash during today's opening stage," confirmed a Bahrain McLaren press release on Saturday evening.

"All eight riders fought successfully through most of today's stage, despite the adverse weather conditions. However, Rafa was caught up in a high-speed crash on the Promenade des Anglais with just three kilometres to the finish line," it read.

"Rafa was taken to hospital and has undergone surgery on his fractured femur, plus treatment for superficial wounds he sustained on his right shoulder, elbow, and knee," added team doctor Carlo Guardascione.

Valls joined Bahrain McLaren this season from Movistar, but previously rode for his new team in its guise as Lampre-Merida during the 2014 and 2015 seasons.