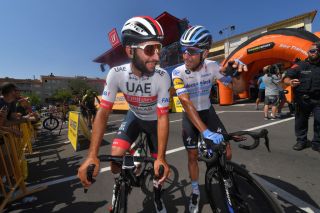 Fernando Gaviria (UAE Team Emirates) consigned a hard season to the history books on Monday in Guilin, sprinting to his second stage victory of the 2019 Tour of Guangxi.

The win marked the second time he had beaten quality rivals Pascal Ackermann (Bora-Hansgrohe) and Matteo Trentin (Mitchelton-Scott) in five days, completing a comeback from the knee injury that ruined much of his 2019 season.

The Colombian was pleased to take the opening stage in Beihai but, after adding to his tally on the penultimate stage of the race, he seemed altogether more relaxed and confident, like the rider he was before the injury.

"I'm really happy to win again here in China," said Gaviria after the stage. "I felt really good - I had really good legs at the end of the stage when I did my maximum effort. Now I'm ending the season really well, and I'm more motivated for next season."

After a testing stage, which included a tough climb 35km from the line, Gaviria jumped onto Sunweb rider Max Kanter's wheel for the run to the line, launching himself along the barriers with 175 metres to go.

Despite stage 3 winner Ackermann going early and finding his wheel in the closing metres, Gaviria held on for a convincing victory.

"The climb was really difficult, but 5km later in the downhill we came back, and then I was relaxed. The team tried to make a really good plan for the lead-out but, in the sprint, it was a little bit confused and I took another wheel.

"Then I waited for the best moment to start and got that little bit of a gap to the finish line."

Gaviria played down the idea that he's back to top shape after his knee injury, which was sustained in a track crash all the way back in April. He did say, however, that there are no lingering issues with the injury.

"It's been a really difficult season because of my knee problems," he told Cyclingnews at the start of stage 4 in Nanning. "I had a really long time without the bike, and then when I got back on the bike, I trained a lot to try and get back to my best condition.

"That was not a good idea because I killed myself. I couldn't change it so that's it. But it's good now. I'll take some weeks to rest [after Guangxi] and I'll start training again before December."

Next season will be a fresh start, then, even if Gaviria doesn't yet know exactly what races he will target. But things will be different in more ways than one, as Gaviria's old lead out man Maximiliano Richeze is joining the team from Deceuninck-QuickStep.

The pair formed a stunning partnership at the Belgian team, with Gaviria taking 9 wins in 2018 and 14 in 2017 when led out by the Argentine. He couldn't be happier with the new addition, who he counts as a close friend as well as a sprint pilot.

"For sure I need one guy like Maxi, because I did three years with him, and we were always doing the same programme," Gaviria told Cyclingnews. "Then we changed, and it was difficult, but ok, next year he will come and for sure we can do more important things together.

"We are really good friends and we speak a lot. We go to dinner and everything. It's really nice to have him joining the team next year."

Back to winning ways and with a challenging season almost behind him, Fernando Gaviria is ready to start afresh in 2020.  With the deadly partnership of his QuickStep days reunited, the likes of Ackermann, Ewan and Viviani should be on high alert.