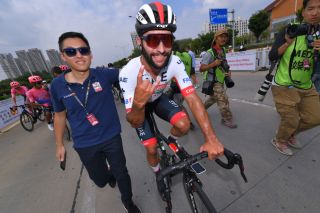 The end of stage 1 of the Tour of Guangxi marked the end of five long months for Fernando Gaviria (UAE Team Emirates), with the Colombian finally tasting victory after an extended barren streak.

Orbetello, on day three of the Giro d'Italia, was the last place Gaviria won a bike race before sprinting to victory in Beihai on Thursday. Four days later he was out of the Italian race, suffering from knee pain sustained in a crash on the track in April.

Since then, it's been a stop-start process for the 25-year-old, with four weeks of physiotherapy followed up by several false starts ahead of belated return to racing at the Tour de Pologne. Now, half a season later, Gaviria is back.

"The feeling is amazing because it's a long time that I haven't won," Gaviria said after the podium ceremony, which saw him take the plaudits for the stage victory as well as the overall, points and young riders jerseys.

"Now, coming back to win in the last race of the season is really good. It's a boost after the misery of the season, and I can now start the winter with a good feeling."

5 riders who need to save their seasons

Gaviria beat Pascal Ackermann (Bora-Hansgrohe) on the line in Beihai after three laps of a circuit around the city, with a long sprint seeing the Colombian come from behind to just edge it on the line.

Stronger competition this time around means that a repeat of his four stage wins at the inaugural edition of the race back in 2017 looks unlikely, but still, the win can only be a positive on a day which was tougher than it seemed on paper.

"I found myself in the wheel of a ride from Bahrain [Phil Bauhaus] and I had the patience and calmness to wait and then go. It was a really long sprint because all the sprinters started too early. Me too, and I arrived from the back and it was really close.

"Immediately as I crossed the line, I wasn't really sure [about the win] because it was so close. I saw a little bit of my wheel in front, but I didn't know until [UAE assistant directeur sportif] Paolo Tiralongo said I had won."

Now back on top, and with his confidence boosted, Gaviria can look forward to stages 2, 5 and 6, and perhaps even the toughened-up stage 3 circuit race. But with one victory already in the bank, he'll be ending his season a happier man than he has been for months.