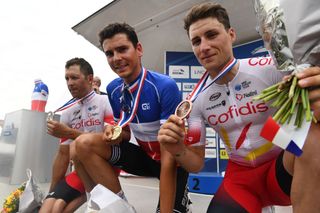 The French government’s decision to prohibit public gatherings of 5,000 people or more until September has left the French Championships facing cancellation, but the rescheduled Tour de France remains on the calendar for the time being, from August 29 to September 20.

Prime Minister Édouard Philippe’s announcement regarding coronavirus restrictions on Tuesday brought an immediate end to the French football season and initially looked to have compelled ASO to postpone the Tour further. However, the Ministry for Sport later clarified that the decree did not mean the Tour would be cancelled but conceded that it might have “consequences for the number of spectators.”

“The Tour de France isn’t in question. There won’t be big gatherings before September but the Tour starts on August 29, there could be some adjustments,” a Ministry for Sport spokesperson said, according to L’Équipe. “It’s up to ASO to make proposals.”

L’Équipe quoted another government source who noted that the limit on public gatherings of 5,000 people or more could last beyond September: “We don’t know how it’s going to develop. It might be that the Tour will have to adapt to this threshold, just as it’s still possible that it could be cancelled if the health situation calls for it. ASO has always been clear on that.”

It remains to be seen if the restrictions on public gatherings will force the postponement of all other racing in France in the lead-up to the rescheduled Tour.

The French Championships in Plumelec have already been postponed until the week before the Tour, with the men’s road race fixed for August 23, but the mayor of Plumelec said that the event cannot now go ahead in light of Tuesday’s announcement.

Asked if he thought holding the event behind closed doors was possible, Hamon said: “I absolutely don’t think so.”

Another Breton cycling event is still hoping to go ahead in the week before the Tour, however, with the organisation of the Bretagne Classic Ouest France continuing to plan for its races in Plouay on Tuesday, August 25.

The event was initially fixed for August 23 but put back by two days when the coronavirus pandemic caused the French Championships and the Tour de France to be postponed until August.

Jean-Yves Tranvaux told Ouest France that the organising committee will limit the crowd at the finish line to 3,000 spectators, who would have to pay €10 for a pre-reserved ticket and a numbered face mask “to restrict the number of people and thus enable safety standards to be respected.”

“The number of people at the finish line will be limited to 3,000 spectators,” Tranvaux said. “If events with less than 5,000 people are allowed, then we have the space to accommodate the public. The finish line is a kilometre long and 100 metres wide, so that's 100,000 square metres.”

The UCI has yet to flesh out its plans for the revised calendar of racing around the postponed Tour de France – a meeting scheduled for Wednesday has been postponed – but it was anticipated that a scaled-back Critérium du Dauphiné would be held in August as preparation for La Grande Boucle.

Speaking to L’Équipe, Groupama-FDJ manager Marc Madiot insisted that it was “achievable to have races with fewer than 5,000 people in August.”