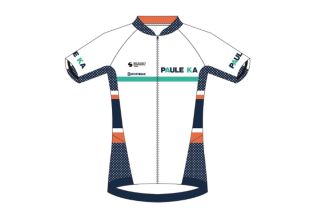 The team formerly known as Bigla-Katusha has unveiled their new look and team name ahead of the 2020 season restart, with a rebrand to Équipe Paule Ka coming after the French fashion house agreed to sponsor the squad until the end of 2024.

The new sponsorship deal was announced in the middle of July after both Bigla and Katusha abruptly withdrew funding for the team at the end of April. The squad subsequently launched a crowdfunding appeal and accessed their UCI bank guarantee in order to pay rider and staff wages in April.

New sponsor Paule Ka is a high-end, ready-to-wear clothing brand created in 1987 by designed Serge Cajfinger, with 90 stores across the world and a strong online presence.

"We are incredibly proud to announce that as of today, our team will change name from Bigla-Katusha to Équipe Paule Ka," read a statement from the team.

"Since the formation of our long-term partnership with the emblematic independent French fashion house, the team has been working towards an updated look, which we are pleased to present today, in our new kit design and team vehicle livery."

While the team will retain the navy, orange, white and aqua green colours, the kit design has been flipped 180 degrees, with white now the main colour and blue and orange trim down the sides and an aqua stripe across the chest. Team cars and vans have also undergone a similar rebranding.

"As we embark on our journey with Paule Ka, we also say farewell to Bigla, a valued partner of ours since 2005," continued the team statement.

"The support of Fritz Bösch and the entire Bösch family has been deeply instrumental in the development of countless talents in the women’s peloton, and we thank them for their tireless dedication to the sport, which has spanned more than a decade. Without them, the many successes of the team would never have come to fruition over the years.

"As the racing season soon verges on recommencement, we are excited to take up this new chapter in the history of our team, alongside our valued partners and supporters, to achieve yet more ambitious goals in the current and forthcoming seasons."

Upon announcing the Paule Ka deal, the team – which races at Women's Continental level – said that they will apply for a Women's WorldTour license for 2021.

"With this partnership, the team will also be opening a new chapter," said team CEO Priska Doppmann Campana. "We are seeking a WorldTour license, and will be developing a masterclass project, in which we will be able to keep furthering the potential of the athletes that have gone through our development program."

The team, which will return to racing at Strade Bianche on August 1, enjoyed a winning start to the 2020 season, with two stage victories coming at the Vuelta Comunidad Valenciana Feminas courtesy of Emma Norsgaard Jørgensen and Leah Thomas. New Zealander Niamh Fisher-Black took her national road race title and the Gravel and Tar la Femme.

PRESENTING ÉQUIPE PAULE KA⁣ ⁣ We are incredibly proud to announce that our team will race under the name Équipe Paule Ka. ⁣ ⁣ As we embark on our journey with Paule Ka, we also say farewell to Bigla and thank Fritz Bösch and the Bösch family for their tremendous support since 2005.⁣ ⁣ With the racing season verging on recommencement, we are excited to take up this new chapter in the history of our team, alongside our valued partners and supporters. ⁣ ⁣ Swipe up in our Instagram Stories for more details. ⁣⁣ . Vehicle photo: @we.are.contrast Équipe Paule Ka