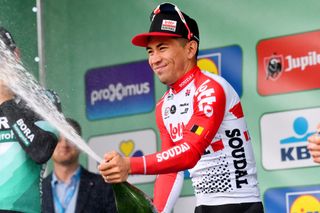 Caleb Ewan scored his tenth win of the campaign on Saturday after a close-fought finish to the Brussels Cycling Classic. Ewan, who finished second to Elia Viviani in Hamburg at the end of August, beat Pascal Ackerman (Bora Hansgrohe) and Jasper Philipsen (UAE Team Emirates) to the line after another sterling lead-out from his Lotto Soudal teammates. It was Ewan’s first win since taking three stages wins at the Tour de France in July.

“I am very happy with the victory during my first participation in this race,” Ewan said in a press release issued by his team.

“To be honest, I didn’t feel great today and I was struggling on the climbs. But once the adrenaline kicked in, it went better. It was a pretty stressful day and also the rain and the narrow roads made it quite a difficult race. There was also a lot of stress in the bunch. So, all those things made the race that - I think, usually would be easier - a lot harder. Luckily, the team did a great job to keep me at the front during the difficult moments.”

The race saw a seven-man break form in the early stages before the sprinters’ teams  - including Lotto Soudal – began to chase. In a technically demanding finale, the race split several times with Ewan making the cut, alongside teammate Nikolas Maes. The Belgian guided Ewan through the finale before the Australian opened up his sprint. The race finished with several sprinters crossing the line just inches apart but Ewan just did enough to take the win.

“In the end, especially with the slightly uphill finish and the headwind, it really was a grind to the finish line. But I think I just timed my sprint really well. I don’t know if I was the strongest sprinter today but I think I timed it the best and luckily, I still had that little extra in the legs to take the win.”

Ewan’s debut season in Lotto Soudal colours has been a huge success. He missed out on a win at the Tour Down Under in January but opened his account at the UAE Tour a month later. Two wins at the Tour of Turkey were followed by two Giro d’Italia stage wins, a stage of the ZLM Tour and then three stage wins  - including the final day of racing in Paris – at the Tour de France.