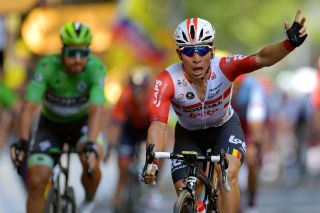 Lotto Soudal sprinter Caleb Ewan's expression is a combination of disbelief and relief as he takes his first Tour de France stage victory on stage 11 of the 2019 edition of the race (Image credit: Getty Images)

Australian sprinter Caleb Ewan has admitted that he found the stress of his first Tour de France in July difficult to deal with, and that finishing it was "the biggest relief of my life", despite having won three stages.

Second win for Ewan on stage 16 in Nimes

After four years with Australian WorldTour team Mitchelton-Scott, Ewan made the decision to join Belgian WorldTour outfit Lotto Soudal for the 2019 season, effectively replacing their established sprinter André Greipel, who moved on to Pro Continental squad Arkéa-Samsic this year.

Following years of not being selected to ride the Tour de France with Mitchelton-Scott, Lotto Soudal would give Ewan his first shot at riding the race, but the expectation that came with having a team built around him for the world's biggest bike race was far from insignificant, said Ewan.

"I had to take the risk to move on [from Mitchelton-Scott] because as far as performance, I wasn't getting what I needed from the team," Ewan told theage.com.au at the weekend, referring to his wish to test himself against the world's best at the Tour.

"I went there with my new team, I went there as a clear leader for the team to get them their results," he explained. "They'd just had André there for the last eight years, who'd won them, I think, 12 [11] Tour de France stages, so I'm following on from that.

"I've never done the Tour before, and I've got the media looking at me thinking, 'Is he going to do as well as he thought he was going to the year before, or is he going to get there, do nothing, and were Mitchelton right to leave him at home?'

"I went into the Tour with a lot of pressure from a lot of different angles," said Ewan, whose wife gave birth to the couple's first child prematurely, with their daughter still in hospital when he had to leave for the race.

However, Ewan's wife and daughter were later at the race to see him come away with three stage wins – stage 11, stage 16, and then the race's final stage on the Champs-Elysées in Paris. It was a huge achievement for any rider, but all the more so when it was Ewan's race debut.

"I'm proud of the way I dealt with that and performed through it, especially when in the first half I hadn't won and obviously I needed to win.

"I'd gone to the Tour, I'd done well, I'd done well for my new team, my daughter was born and she was all good. There was so much stress, I guess, leading into the Tour; it wasn't healthy, I don't think," said Ewan.

"In the end, to win three stages in the last 10 days, all that pressure from the start, and then all the pressure again from not winning for the first half, I think is something I can be proud of.

"I actually deal with a lot of stuff just by myself. It's the way I've always been," the 25-year-old said. "I don't know if it's a good thing; maybe it's better if I speak to someone, I don't know, but I think when I finished the Tour, it was the biggest relief of my life."